In 2002 I visited the Spiral Jetty in the Great Salt Lake. It had just emerged from being underwater for years. I had seen the Jetty many times in art history books and had even seen it a few times submerged under water but this was the first time to see it above water. What struck me first was how very white the Jetty was. All the rocks were covered in salt crystals. But most eye-catchingly beautiful was the pink water that surrounded the white salty rocks. It was like a candy ocean in a strange Wonka Chocolate Factory room. 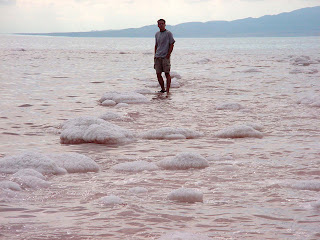 The pink water comes from a bacteria called Haloarchaea. This bacteria was not present before the causeway was created in 1959. The causeway caused the north arm of the lake to become supersalinated allowing Haloarchaea to proliferate. You can even see the difference in the lake color from a satellite picture. Notice the hard line that indicates the causeway: 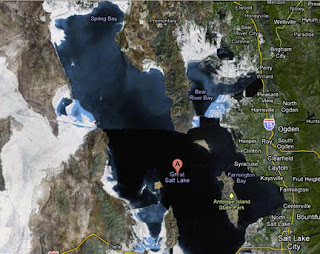 Its colors range from orange to pink and are quite beautiful. Here is a video from the Utah Museum of Fine Arts talking to Bonnie Baxter from Westminster College about the bacteria in the lake. You can see a column of the water in the video.


There is some funky knitting that can be done with these colors!
Posted by Virginia Catherall at 9:53 AM