My husband just got a new Jeep and he wanted to take it out on some rough roads this weekend so we took a trip to the mountains and to the lake. It was a cold and windy December day but still, the views were beautiful. 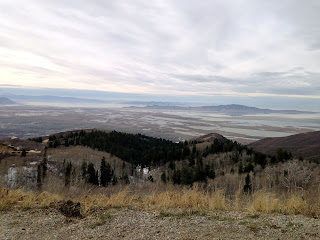 This is the view from the Skyline Trail looking out over the Great Salt Lake. It is only about 20 minutes from our house but we felt like we were miles from everyone. We took a side trail that was very rough but didn't get too far because we didn't tell anyone where we were going and it would have been bad if we had gotten stuck. 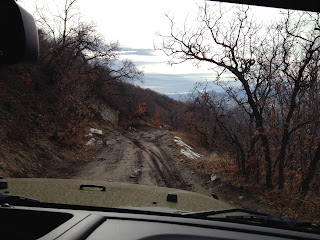 We also took a trip to see the Spiral Jetty again. It was visible and beautiful covered in salt water foam. 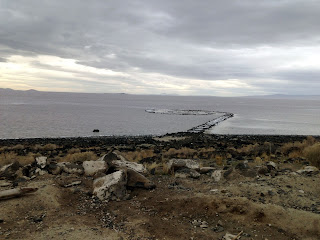 It was just cold enough and the Jetty had just enough water on it that we could not go too far out onto it. That and the fact that my 3 year old fell and was covered in cold sand and salt water made us turn back and just look at it from the shore. 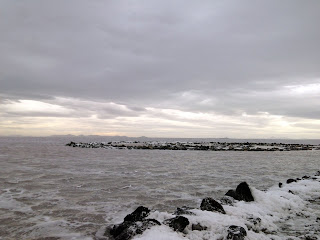 It makes me want to make another Spiral Cowl but in gray yarn because it was such a gray day. But the water was as pink as ever from the halorarchaea bacteria, although it doesn't show up very well in my pictures. 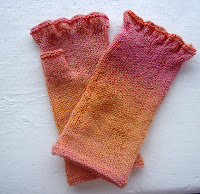 I am still working on my Lake Effect Muff and even worked on it in the car - after all it is a 2.5 hour drive out to the Jetty. I chose a knit/purl pattern that reminded me of clouds. 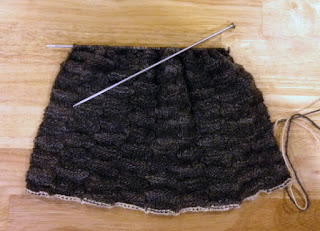 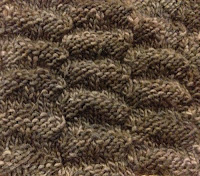 It is slow going with the muff mainly because I am finding the pattern a bit tedious, or maybe I am just hankering to do something else. I think I will try to start a couple other things to help break the tedium.
Posted by Virginia Catherall at 4:32 PM