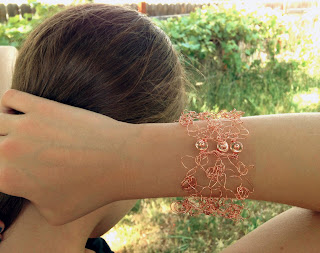 The cuff I designed is very easy and quick to knit. I really like how it looks. I decided to name it after the town Lark. Here is a little history about Lark that I found out:

When gold was discovered in Bingham Canyon in the Oquirrh Mountains, it brought a rush of prospectors. Two prospectors named Dalton and Lark had two claims where settlements grew up around them. These settlements were named after Dalton and Lark. Later, Dalton merged into Lark and the town of Lark was officially established in 1866.

By 1929, Lark was a company town of the United States Smelting and Refining Company. At its peak, the population was over 800 people in the 1950s. But, with the closing of many of the non-copper mines, the town began to decline. In 1972, Kennecott Copper bought the land announced that they were closing Lark to use it as a land dump from the Bingham Canyon Mine. Kennecott moved the 591 people to other locations and in 1978 Lark was officially dismantled.

The Lark Cuff has the rough design of the five face-centered cubic crystal of copper and I used copper button clasps to close it. I put the pattern in my pattern page and decided not to charge for it since it is such a quick and easy design. 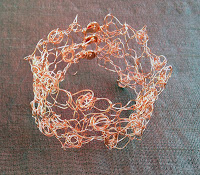 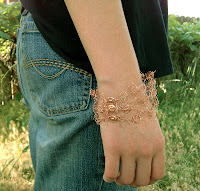 Posted by Virginia Catherall at 8:01 AM