Local folk lore says that there are only two man-made things that can be seen with the naked eye from space. One is the Great Wall of China, the other is the Bingham (now Kennecott) Copper Mine. Although this is totally a myth (you can see lots of man-made things from low Earth orbit) it speaks to the vastness of the mine and its impact on people living near it. 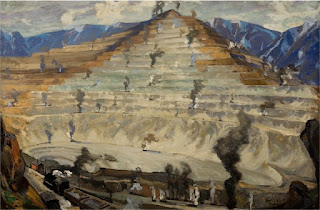 The Copper mine is a big open pit mine that is a few miles south of the Great Salt Lake. It has been in the news recently because of a huge landslide that has caused the mine to close for a year. It is almost incomprehensible because of the scale of the slide and the mine, like a scar dug deep into the mountain. I know that we all need copper, I am using it right now in my computer, but it is very shocking to see the damage that man can do to the landscape. 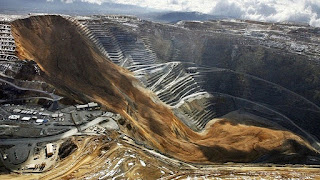 I work at an art museum and one of our docents was telling me about her hometown where she grew up. It was named Lark, but it doesn’t exist anymore. The mountain that the town was on doesn’t even exist anymore. The Copper Mine displaced the town and the people who lived there. The mine affects my view of the beautiful mountains, but at least for now it hasn’t consumed my hometown. 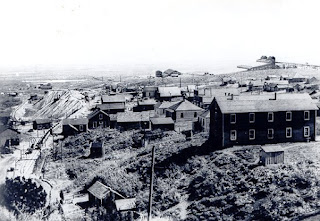 The copper mine and its impact has been on my mind lately. I have been thinking about what copper is used for, and how I can use it. I would like to do another structural piece of jewelry like the Halite Necklace and Salt Bracelet I made last year. They were very fun to envision and knit.

So, this recent landslide in Kennecott made me think of copper. What is the structure of copper? Can it be translated into a knitted structure? What about knitting with copper wire? I think I am going to do some experimenting.

Posted by Virginia Catherall at 11:01 AM