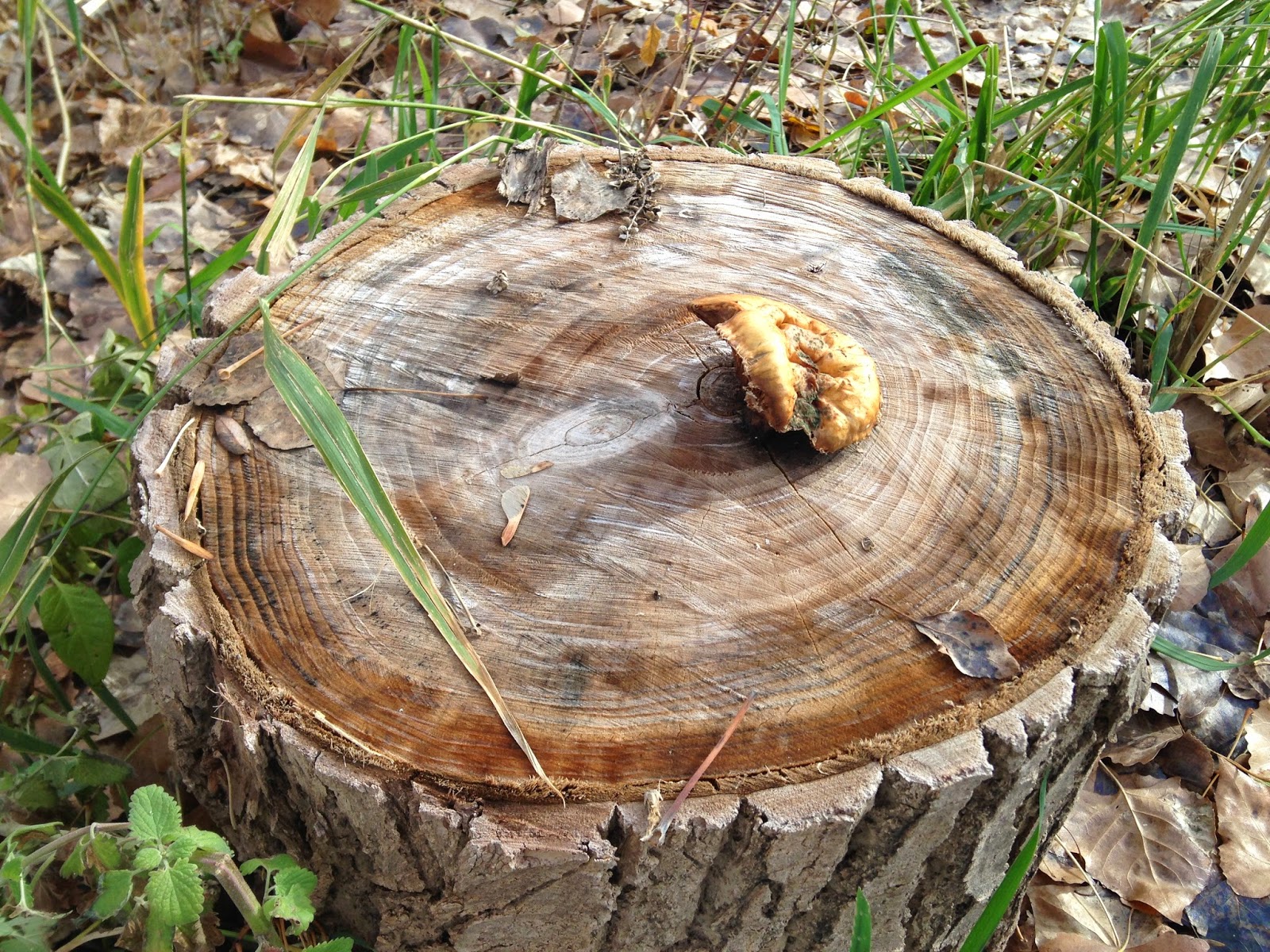 Mushrooms in Utah? But we're a desert! It’s amazing but Utah has many mushroom species, from the most delicate and delicious to the most deadly. I am always amazed when I find one of the several thousand species of fungi found in Utah. My husband just rolls his eyes when I make him stop so I can photograph any I see while hiking. 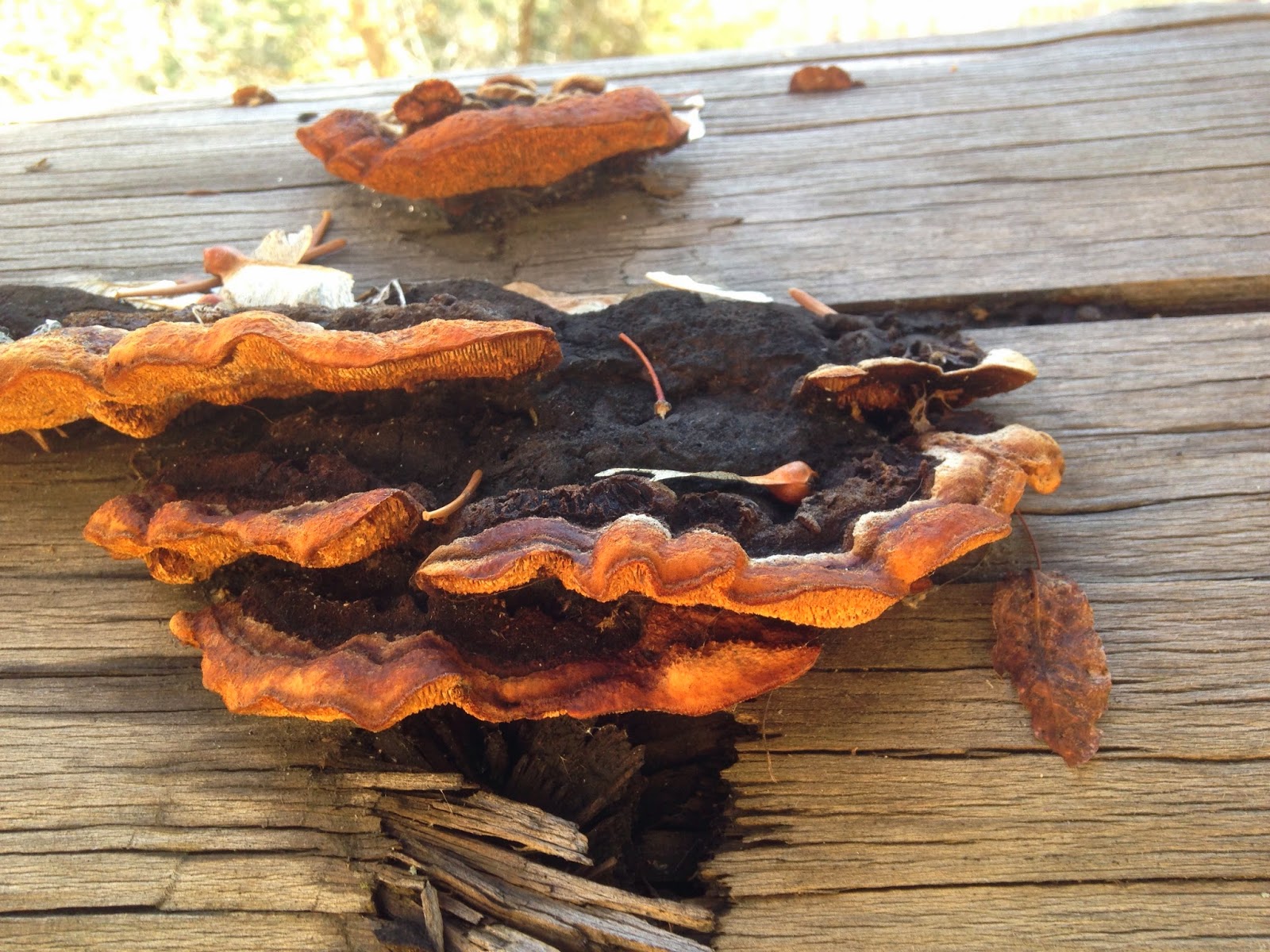 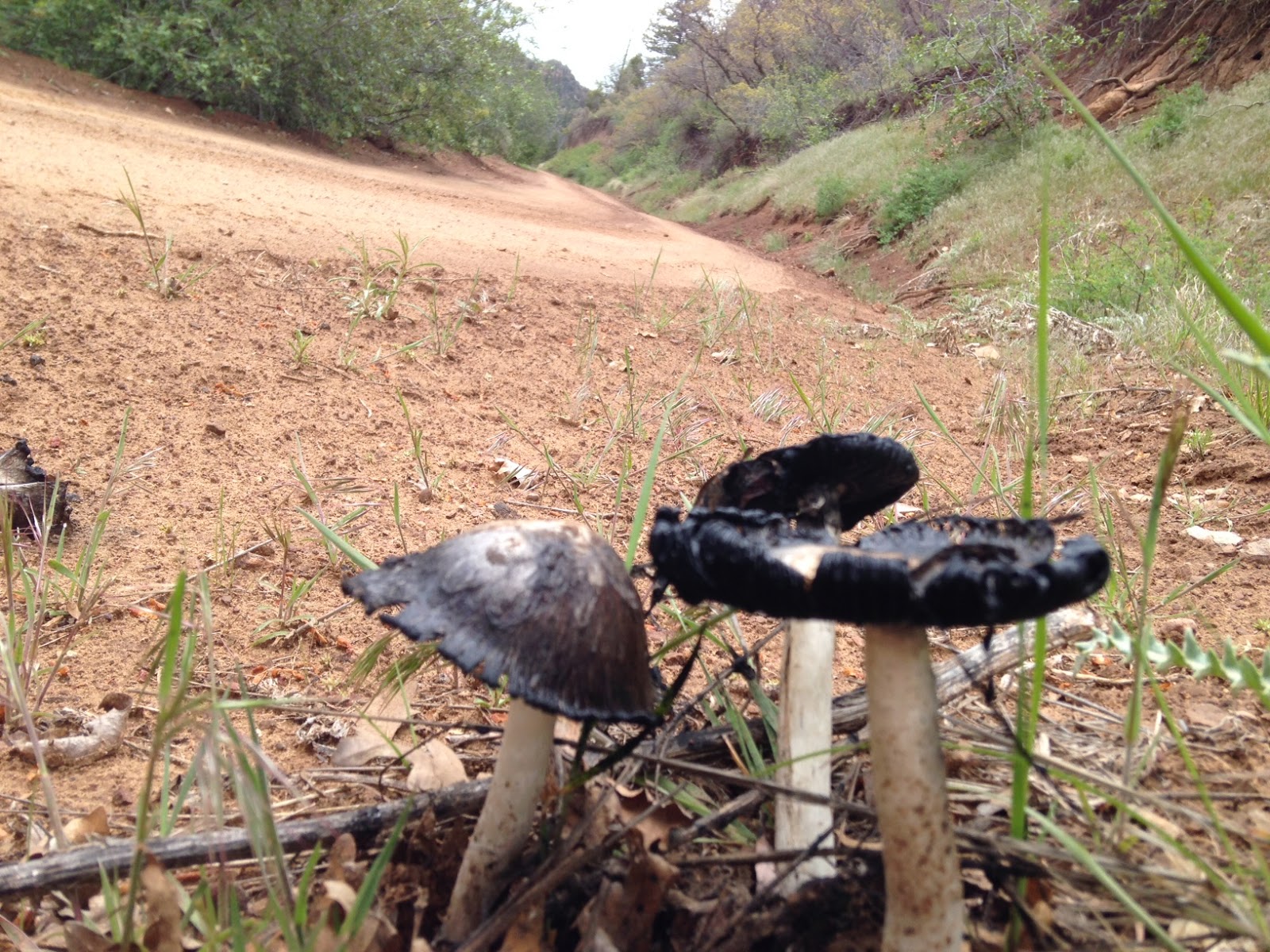 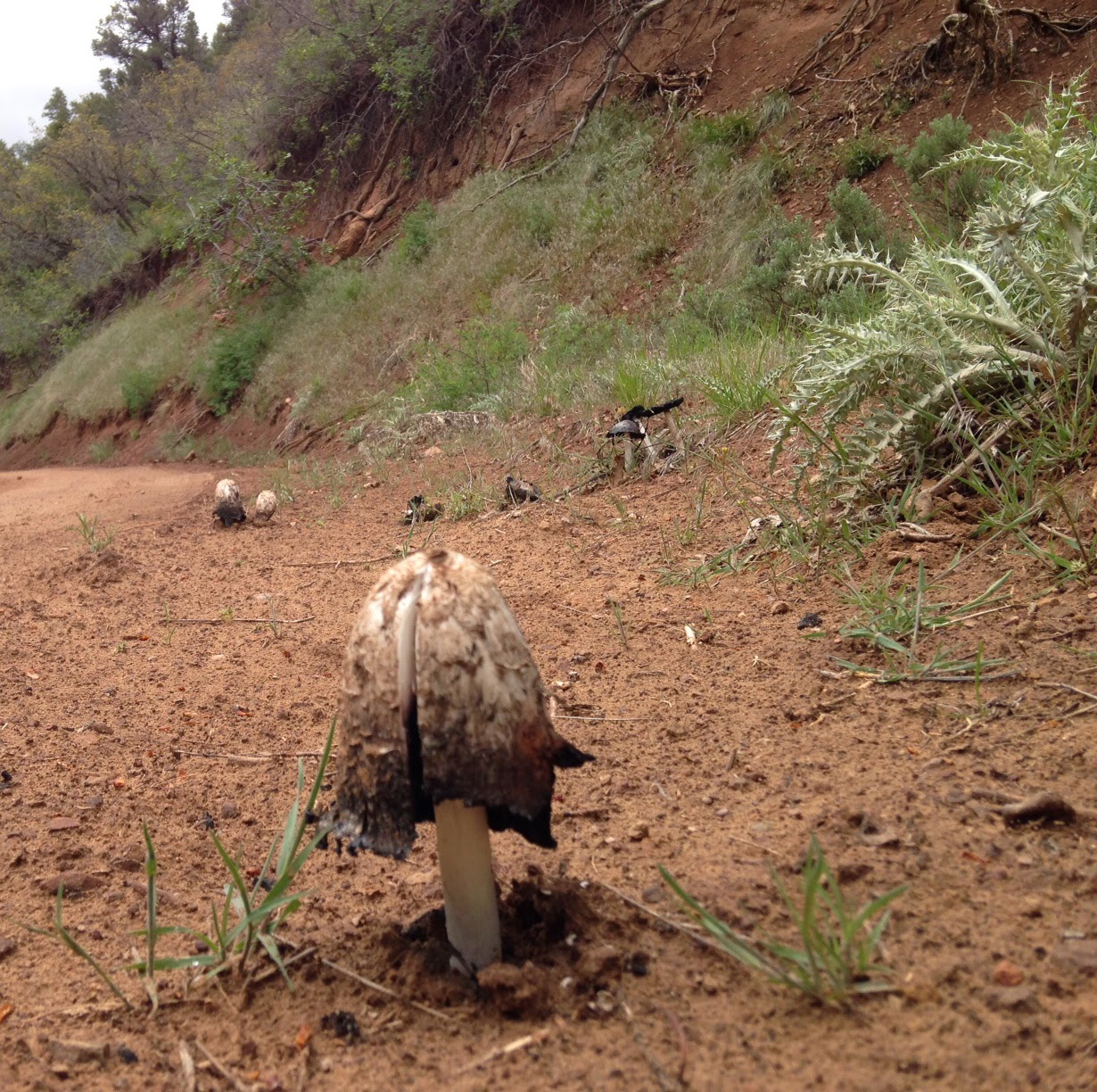 The ones that always fascinate me are the red capped ones. Mainly because I know that most red capped mushrooms are poisonous but they are also the most beautiful. Here in Utah, like everywhere else in the northern hemisphere, we have russula emetica. This mushroom also goes by vomiting russula or the sickener so you know that it isn’t good. It grows mainly in northern Utah in the pine forests. I usually see it while camping in the Uintas. 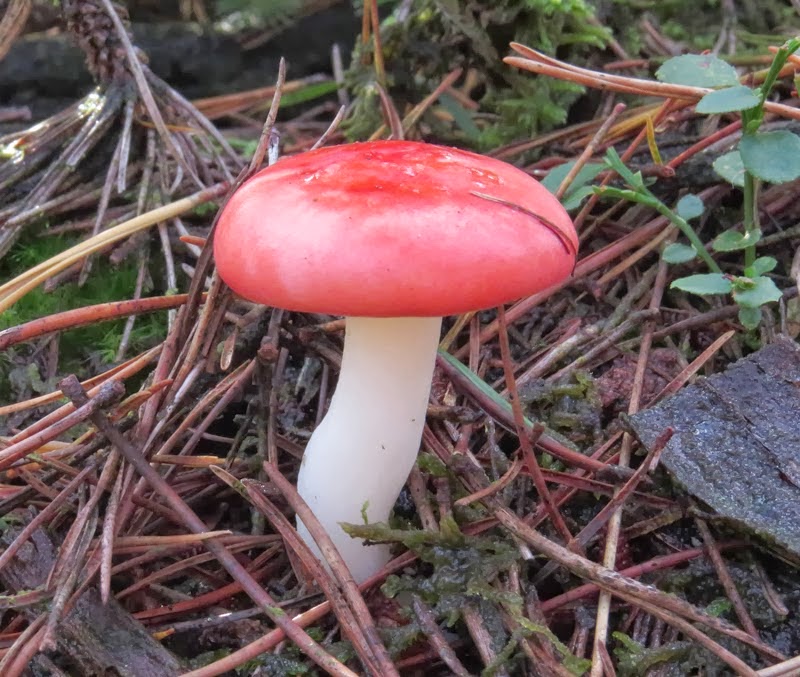 I recently saw a little crocheted mushroom pin that was so cute, I wanted to make my own knitted version, so what better mushroom than the sickener? 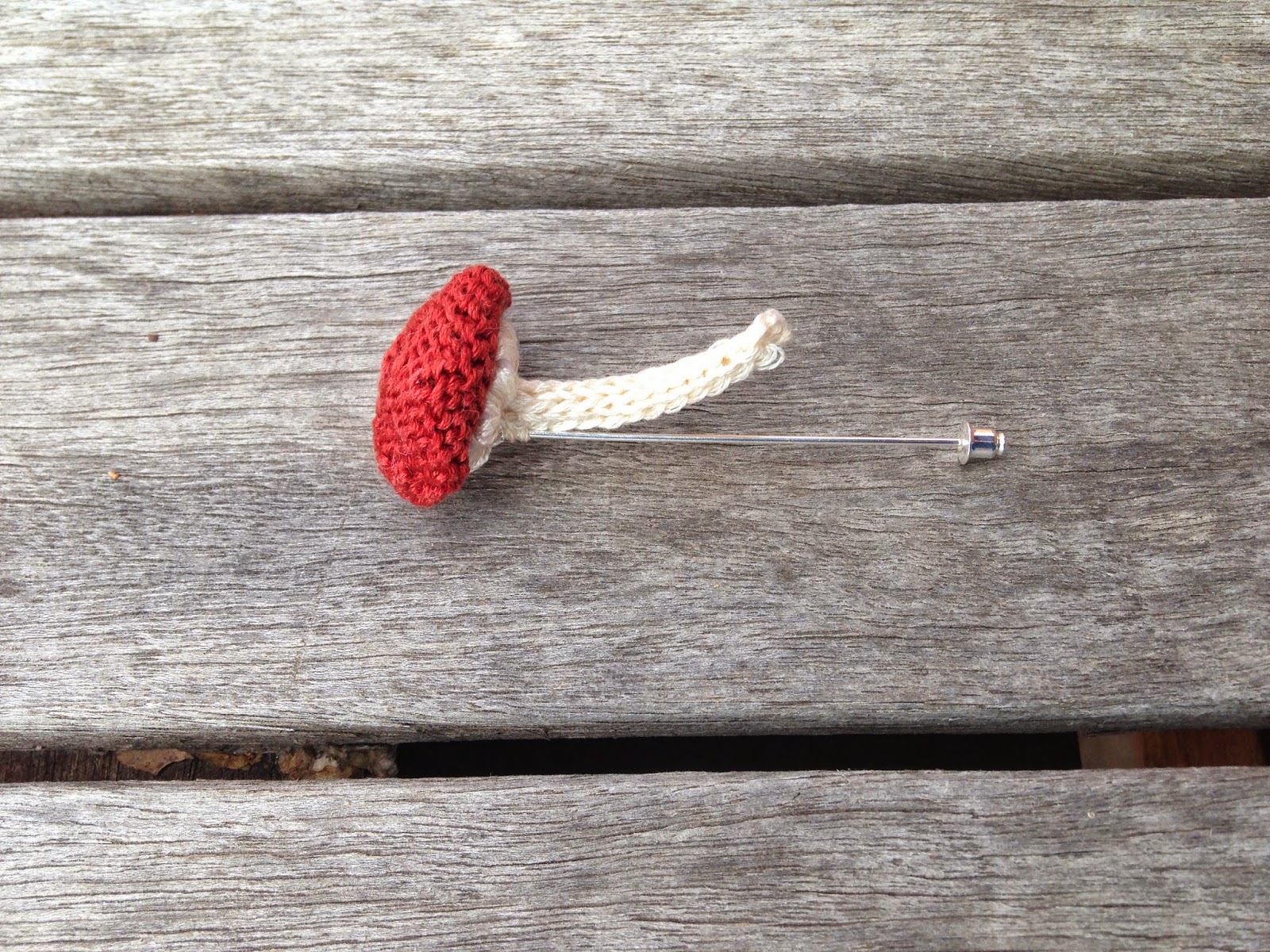 It is an easy knit with a little embroidery. I know it is easy to just figure out but I made it into a free pattern if anyone else wants to make one. Enjoy your Utah russula emetica (but don't eat it)! 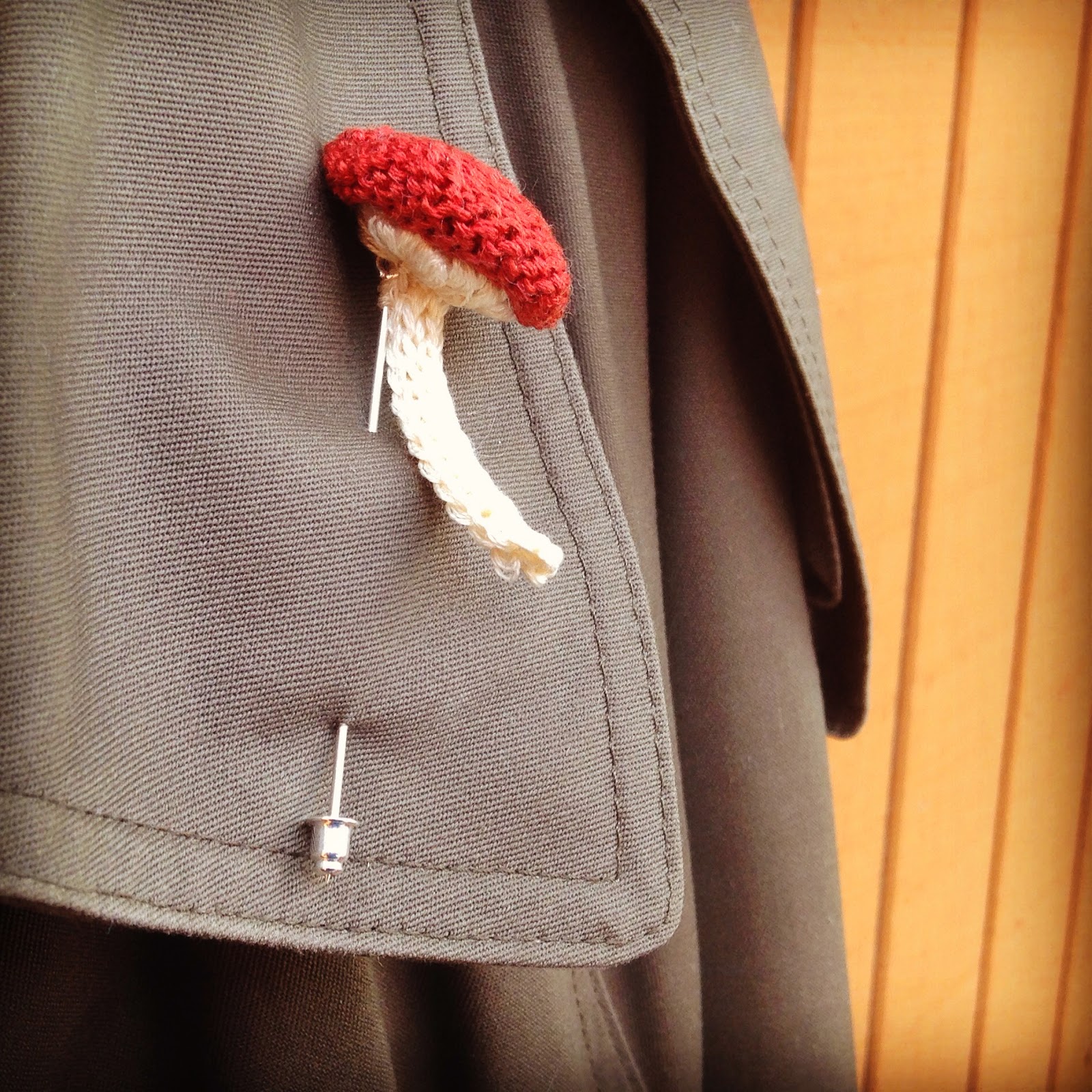 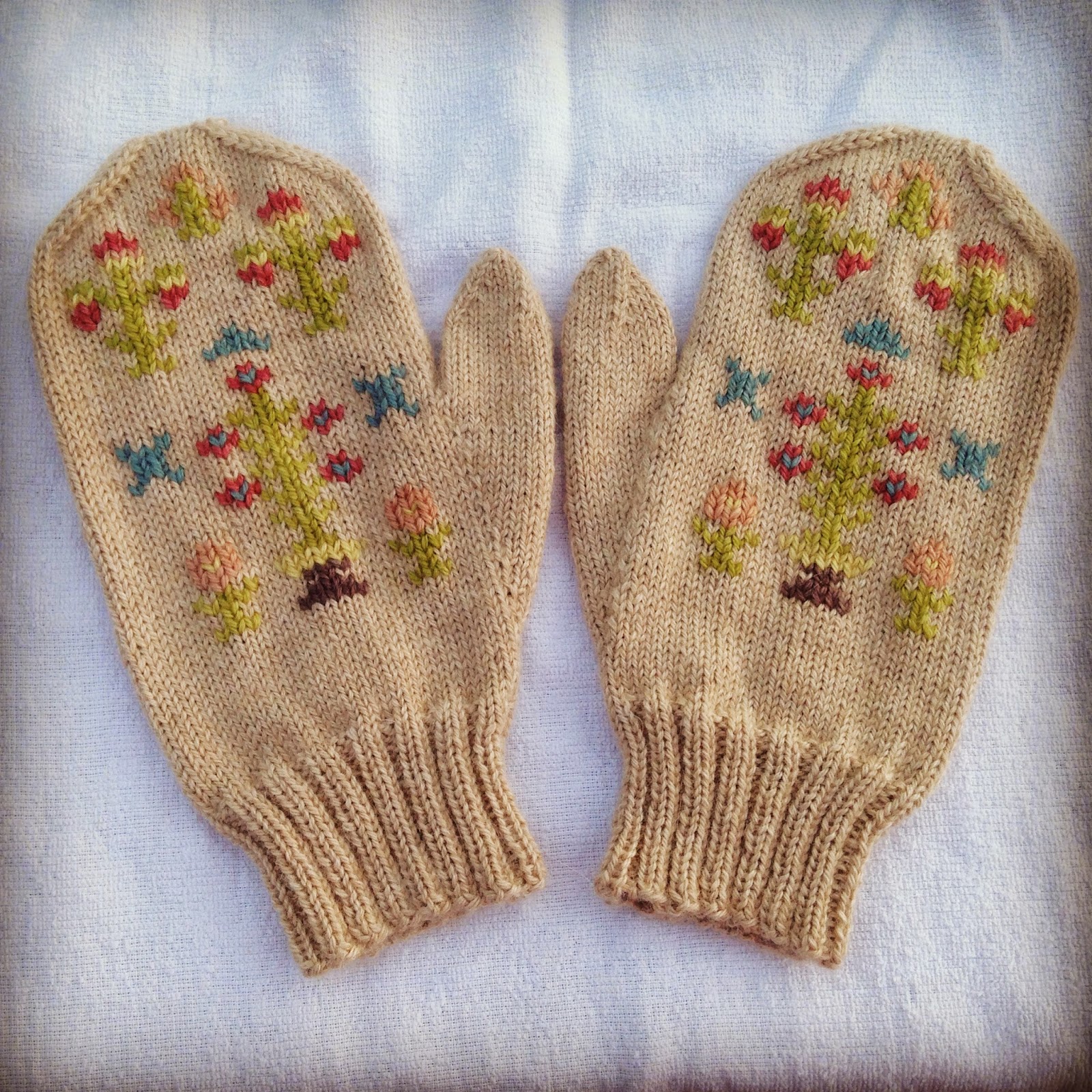 I went camping this weekend with friends and family in beautiful Diamond Fork Canyon in Northern Utah. I was able to get the mittens done and photographed while in the canyon. Here is a picture of Fifth Creek, a hike we took while camping. 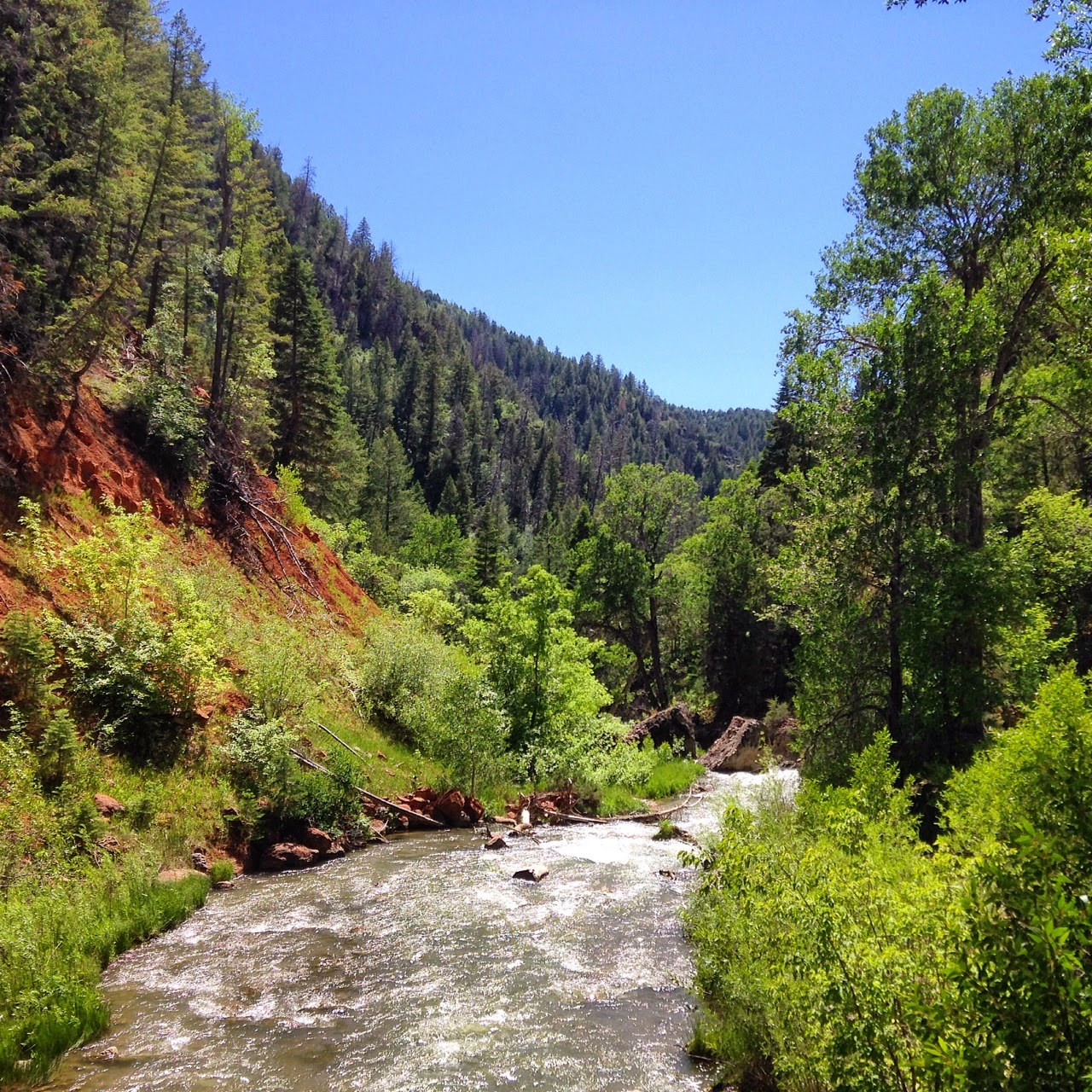 As you can see from the pattern on the back of the mitten, I designed the mittens in the spirit of Sarah’s Sampler. With random floral patterns scattered around. I decided not to put an alphabet or numbers so as not to clutter the design too much. But then thought I should at least put my initials and year just like most samplers have. So the base of the palms of the mittens has VC on one and 14 on the other. In the pattern give a sample alphabet so anyone can do their initials and year. 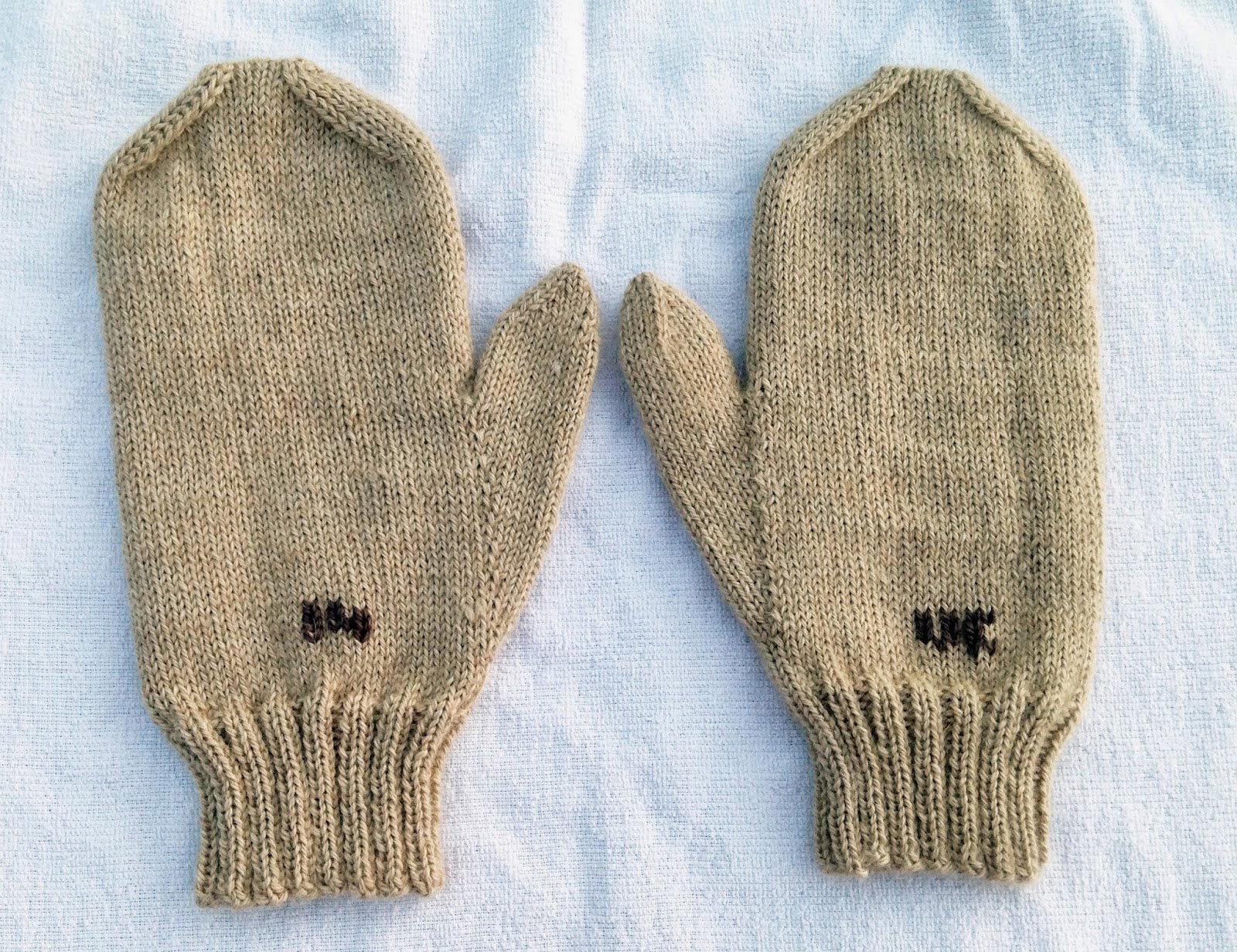 These are pretty quick to knit, especially because the color work is done at the end in duplicate stitch. The lovely Road to China yarn from the Fibre Company is perfect for these delicate mittens. Very soft alpaca, silk, cashmere and camel with muted colors just like the antique samplers from the DUP museum. A little decadent but totally worth hauling 1,300 miles across the plains on foot. 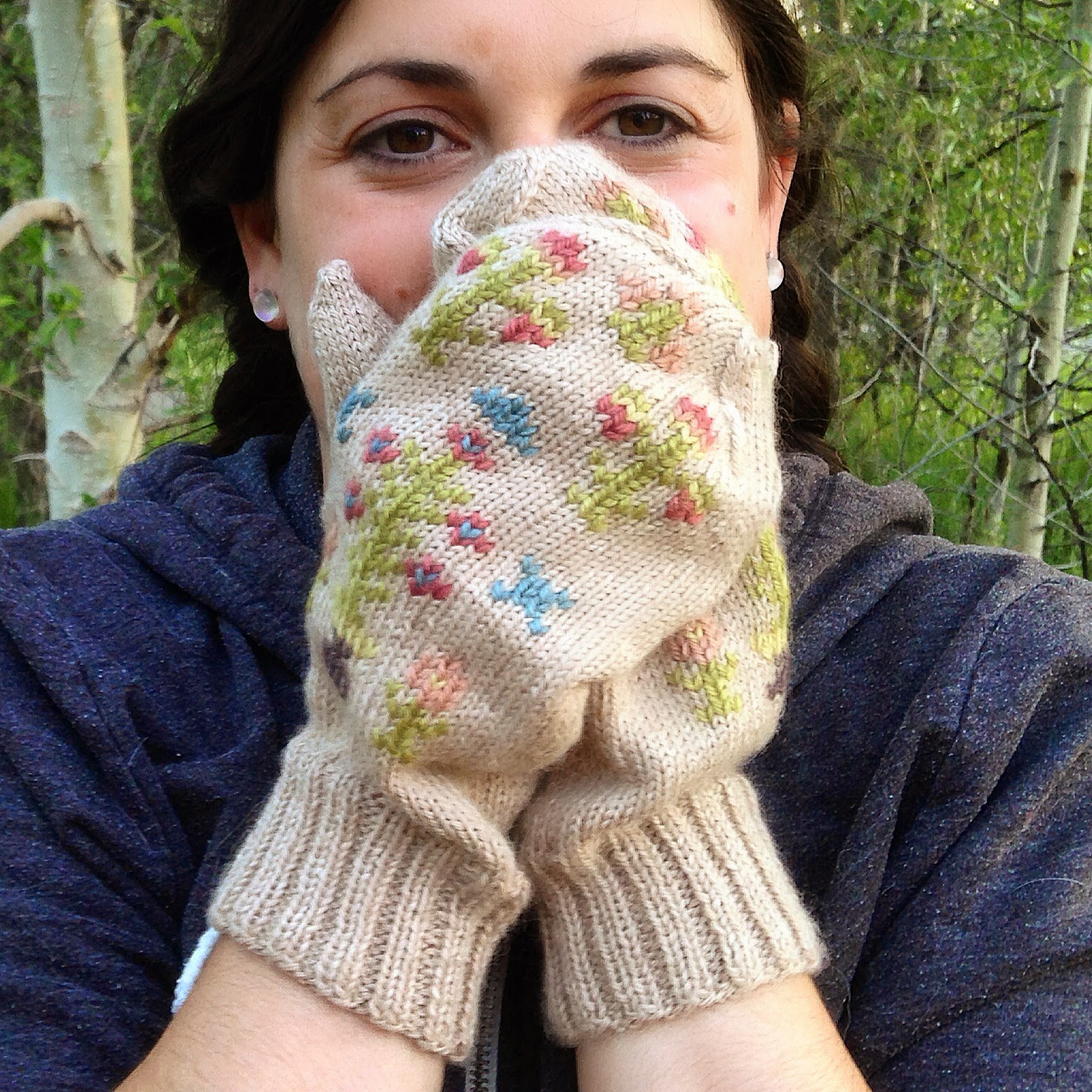 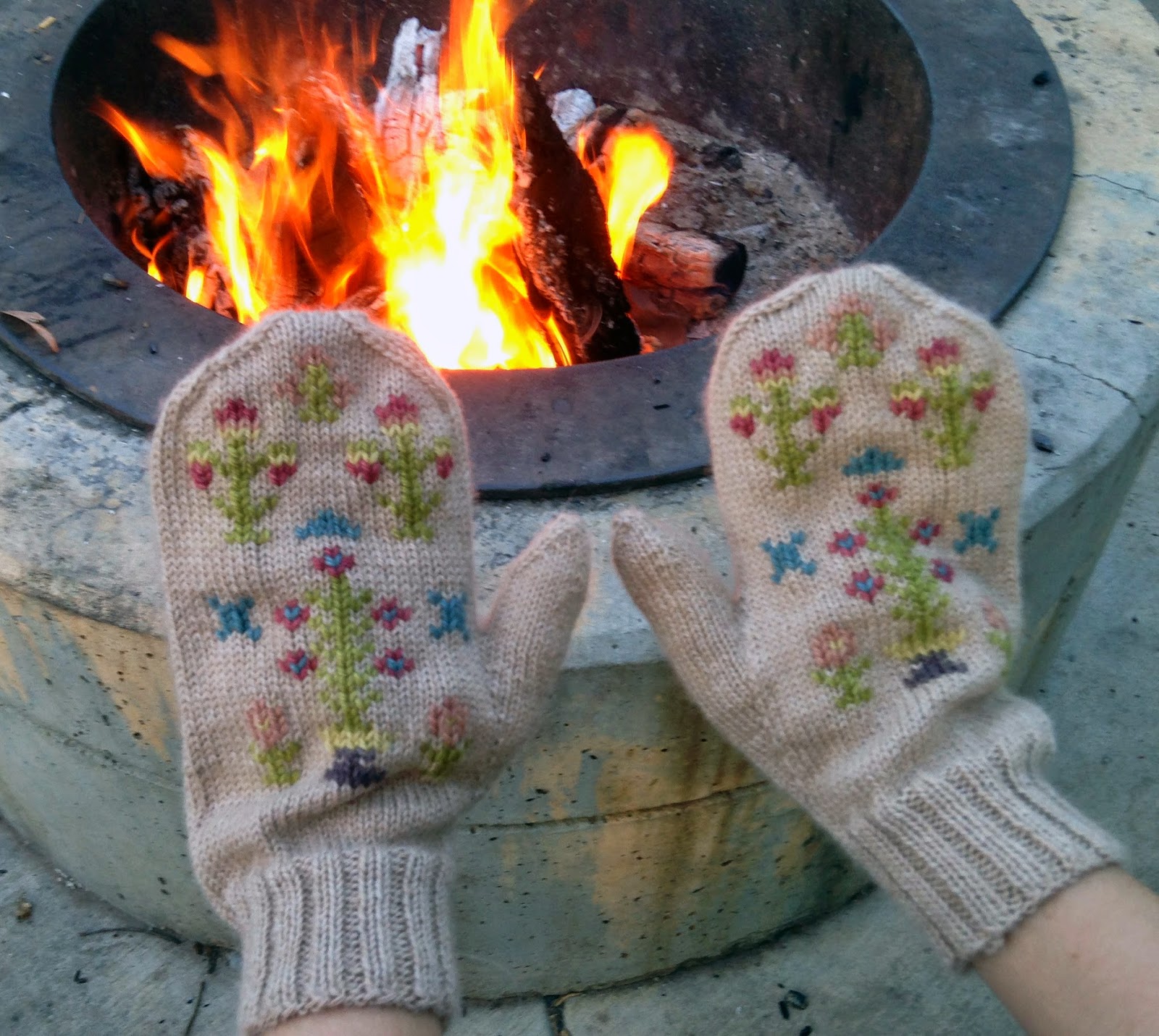 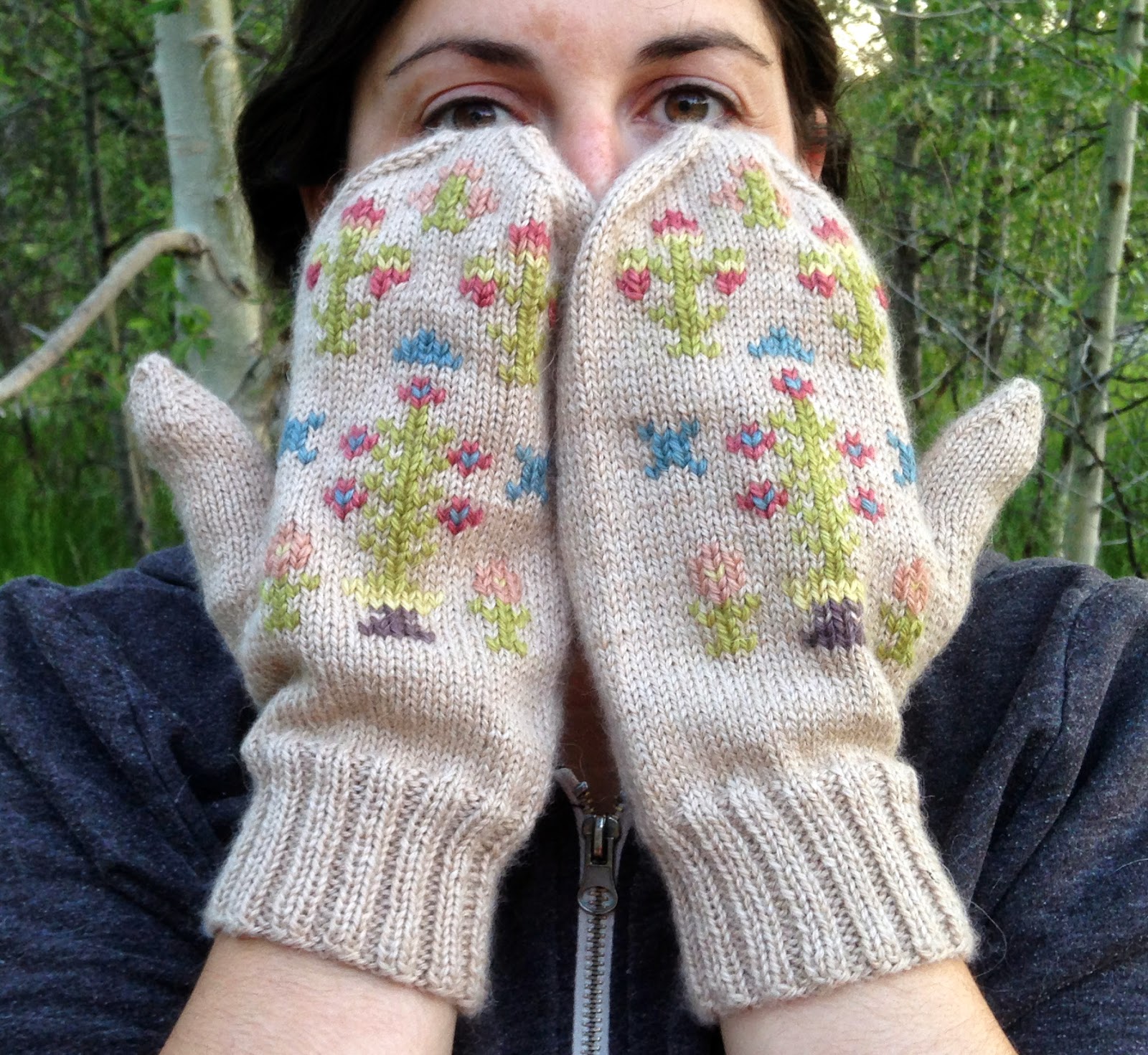 I have the pattern up for sale on Ravelry. I loved getting inspiration from my local textile collection. I will have to scour our history museums for more gems like this one.
Posted by Virginia Catherall at 9:47 PM No comments:

I had to go down to southern Utah for work and took my knitting along. Moab is always beautiful but even more so in the spring. We hiked and visited the desert scenery and high mountains. In short, it fed my soul. The photo below is my son hiking up to Gemini Bridges. 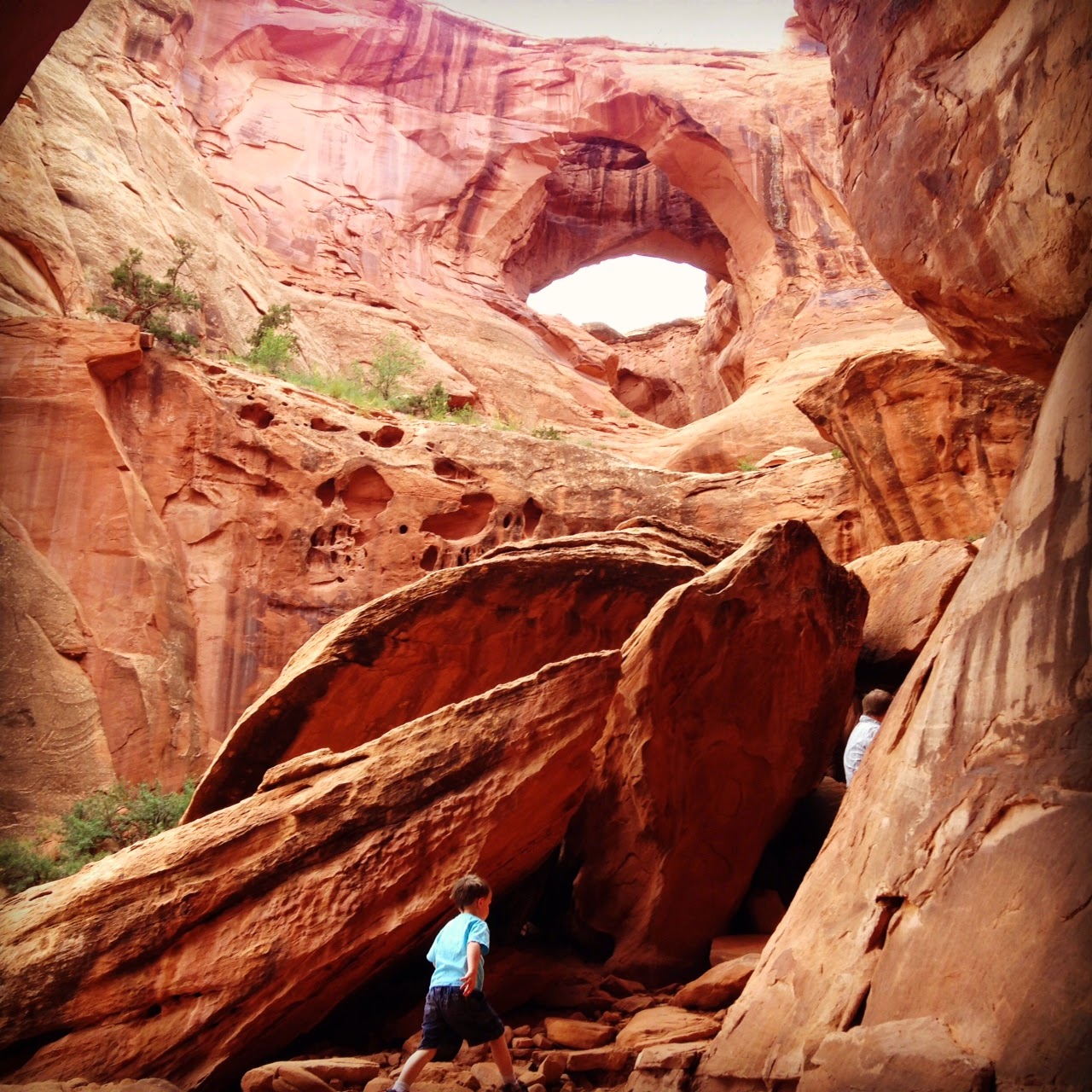 This was also a good opportunity to get a good way on my new design. I decided to make mittens with the sampler imagery using Roositud. It was a good plan except that it was a complete disaster. I was so eager to begin learning the new technique on this new pattern that I totally miscalculated my gauge. The mitten is gigantic and would only fit the largest of hands. 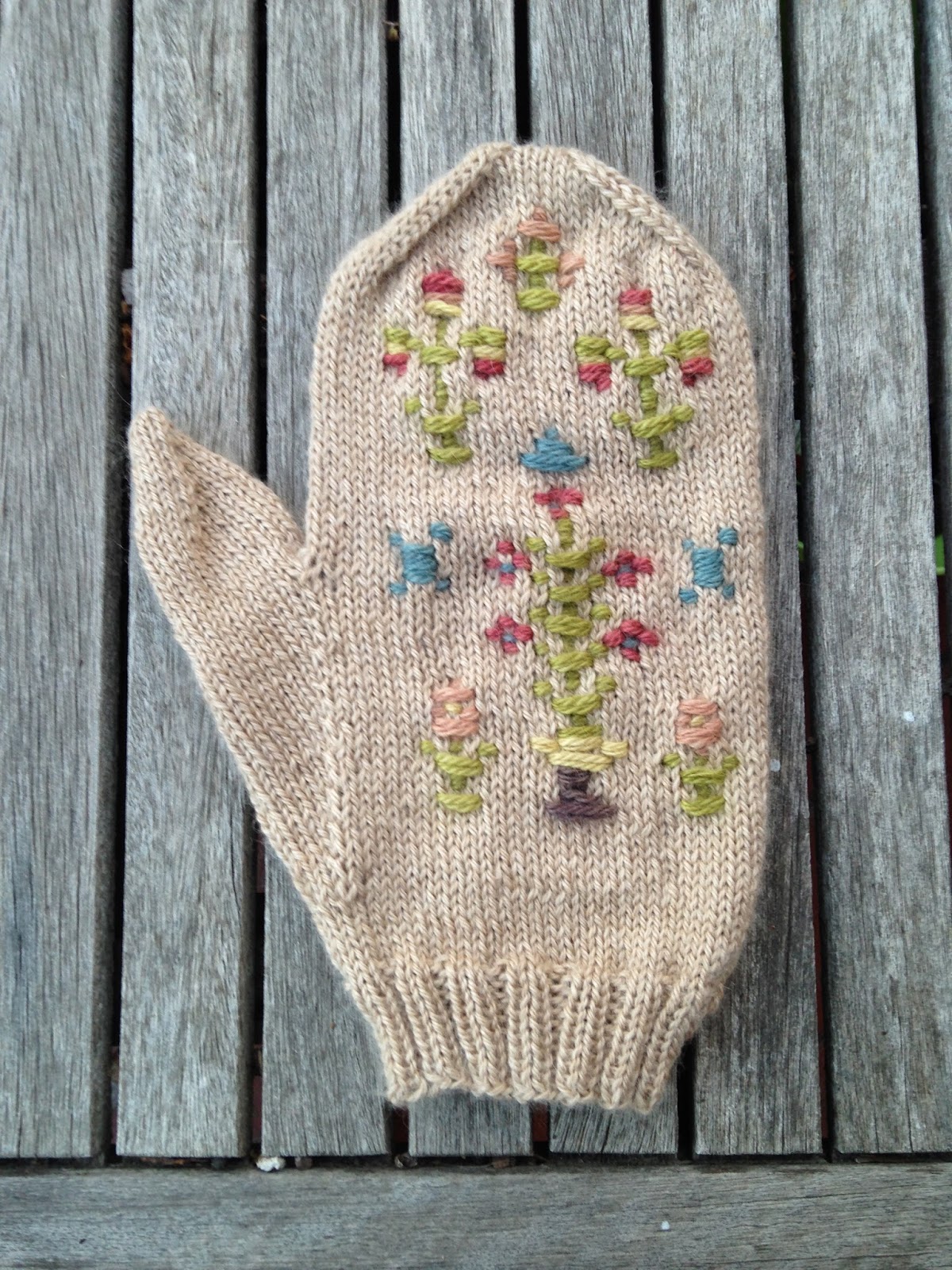 And… I think the imagery that I used from the sampler is not the best for Roositud. From looking at many other patterns using this technique, it looks like geometric patterns work best. The delicate floral patterns just look puckered and strange. 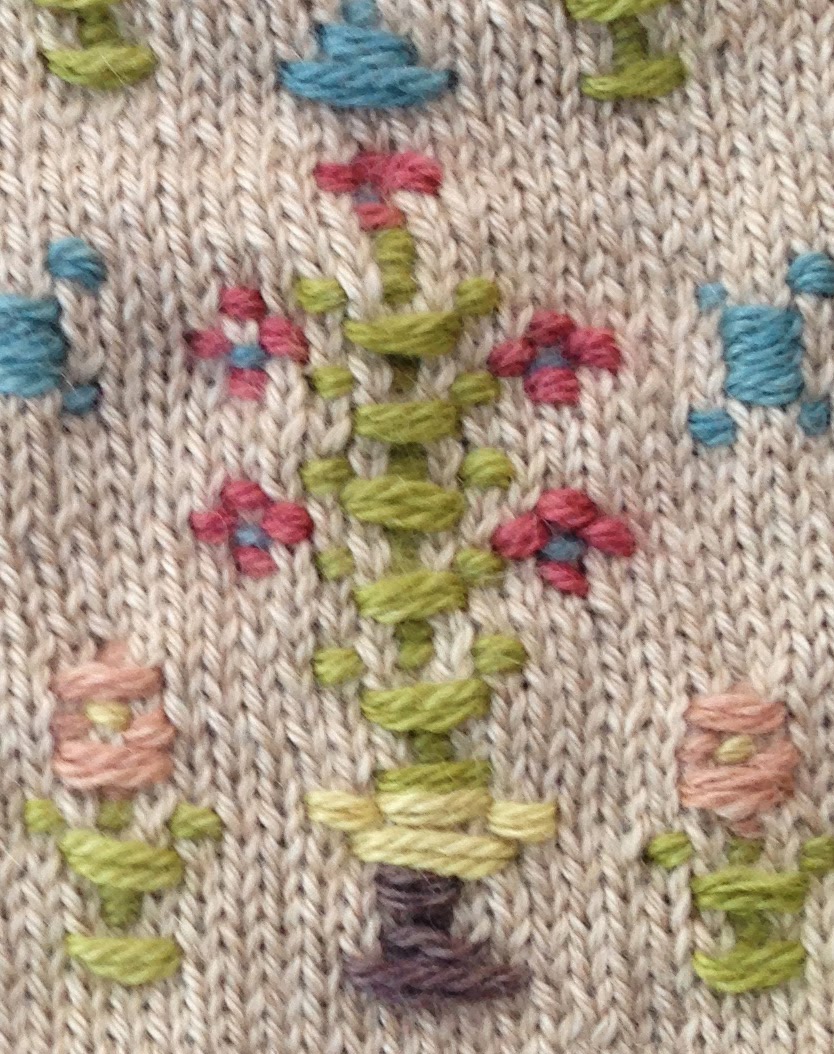 But, I do love this pattern. So, I am going to do my math right and fix my gauge and then use good old fashioned duplicate stitch for the sampler patterns on the back of the mitten. It adheres more to the spirit of the cross stitch anyway. Round 2 of Sarah’s Sampler Mittens coming up.
Posted by Virginia Catherall at 1:51 PM No comments: 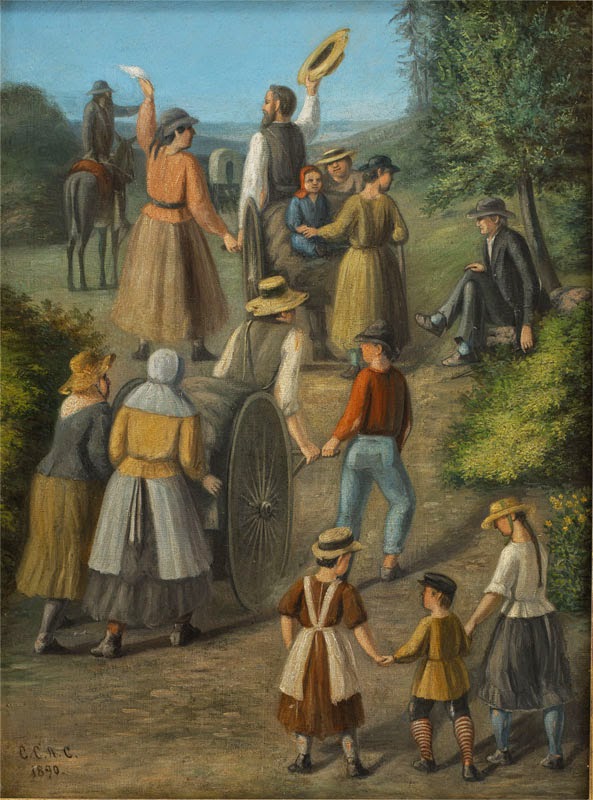 Salt Lake City has a familiar but still unique history in the West. Like many towns in the western US, it was originally inhabited by American Indians until European Settlers came and appropriated the land. In 1847, Mormon (LDS) pioneers from back east came into the valley to settle permanently. With Brigham Young famously stopping at the mouth of Emigration Canyon to say “This is the right place,” the European emigration history of the area began. 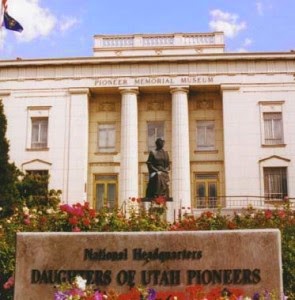 A museum in downtown Salt Lake City documents the pioneers’ journeys. The Daughters of the Utah Pioneers Memorial Museum is a hodge-podge of artifacts from the 19th century pioneers. Run mostly by volunteers, the museum’s philosophy is “open storage,” which means that everything is on view.

I love going to the museum and searching through the overwhelming amount of objects for the one gem that is a surprise. There you can find a two-headed lamb or learn about the pioneer women doctors who paved the way for women in medicine. It is a quirky place that is heaven for any textile or craft artist. 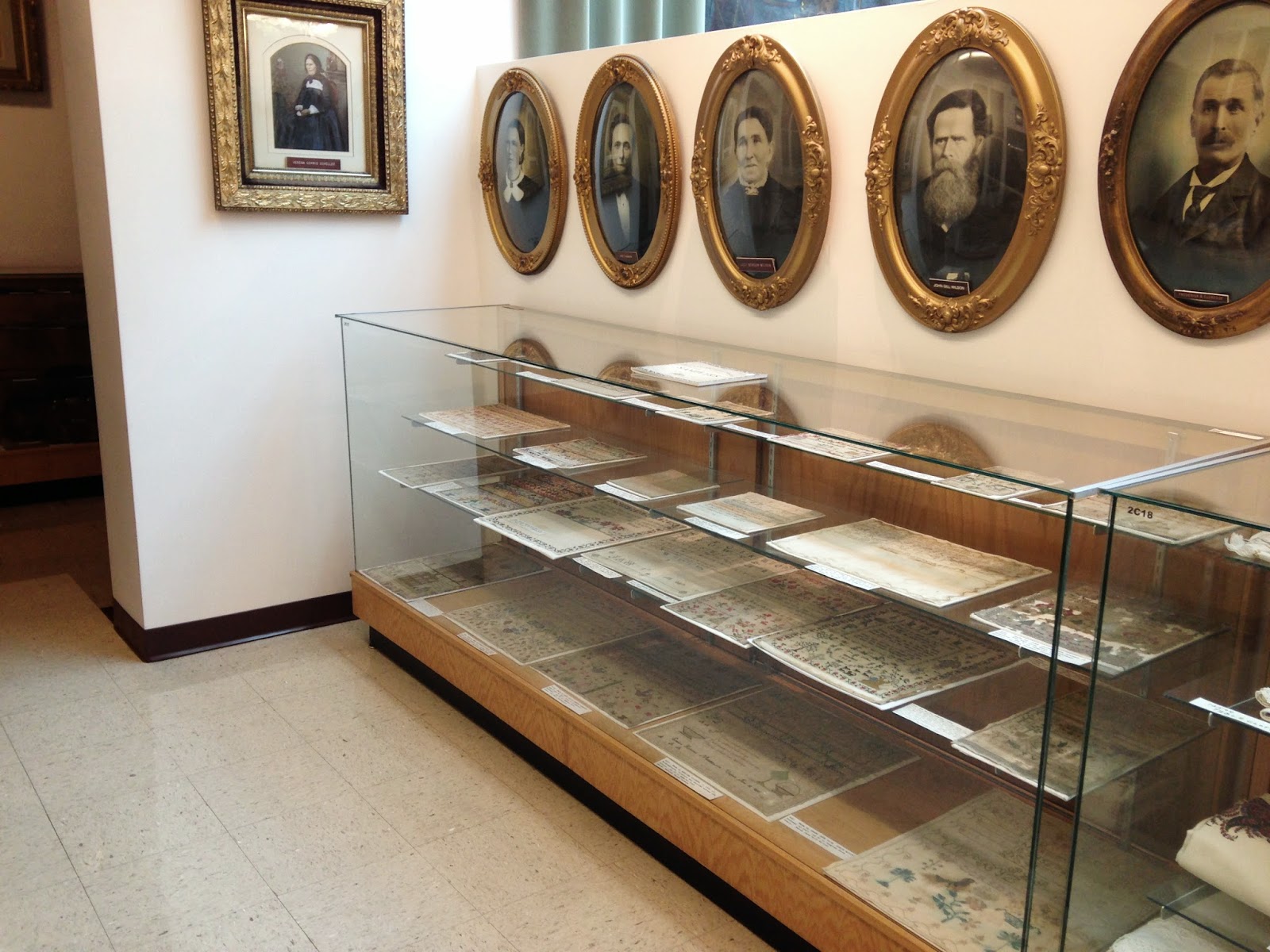 I recently went there and spent almost all of my time in their sampler section. Many of the cross-stitch samplers they have were made back East or in England or another country by young girls and then brought across the plains. I am intrigued by this idea. These samplers must have been very precious in order to have them be one of the few items that could be taken with a young girl as she immigrated to a completely unknown place like Utah.

The imagery on each sampler is similar, and yet different. Most of them have flowers and trees along with the requisite alphabet and numbers. But the variety of the floral elements is impressive. I was struck by one sampler by Sarah Turner and the diversity of designs she had in her sampler. 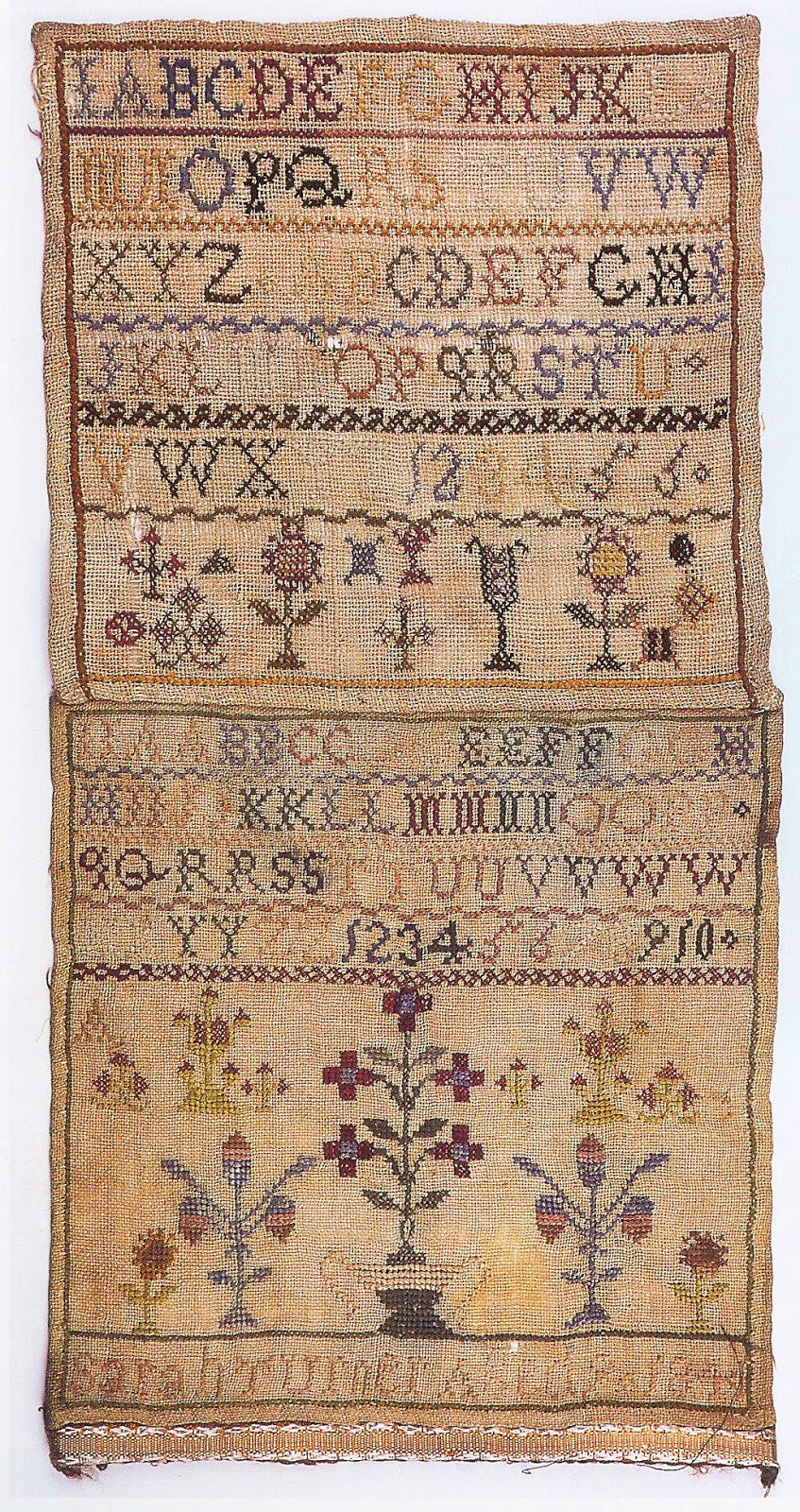 Sarah Turner was just 9 years old in 1840 England when she knit this sampler. After converting to the LDS Church she relocated to the Utah Territory. Sarah and her sister left England alone, traveling by way of New Orleans and St. Louis. At the age of eighteen, Sarah walked from Missouri to Utah Territory in 1850, and she carried her sampler with her the entire way.

I want to utilize the designs in this amazing sampler in something. I have been dying to learn a new knitting technique called Roositud, an Estonian embroidery technique. I might learn this skill with a new design of my own.
Posted by Virginia Catherall at 10:46 AM No comments: