Wow! Summer is in full swing with camping trips, museum workshops in the community, and general spending time with the family. Needless to say, I have not done much writing about knitting. But I have been knitting, just a lot of in-progress stuff that is too boring to blog about. 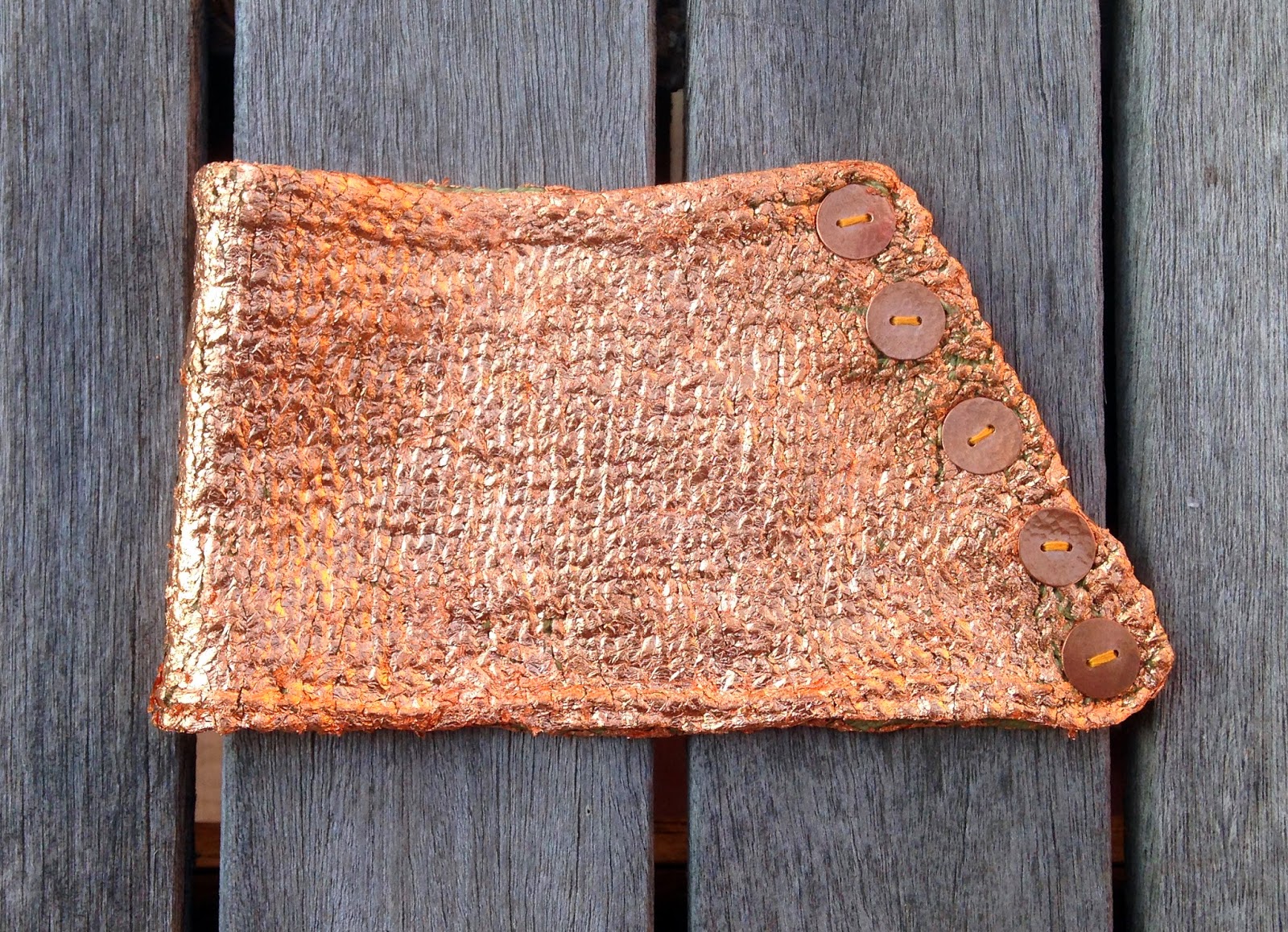 But, today I finally had a day to sit and organize and photograph. So, I finished up the images and pattern for the Bingham Cuff. They are not the best photographs and this is not my favorite project but I really liked experimenting with the copper leaf. And, maybe it will inspire other metal leafed knitting projects. I think there are a lot of possibilities. 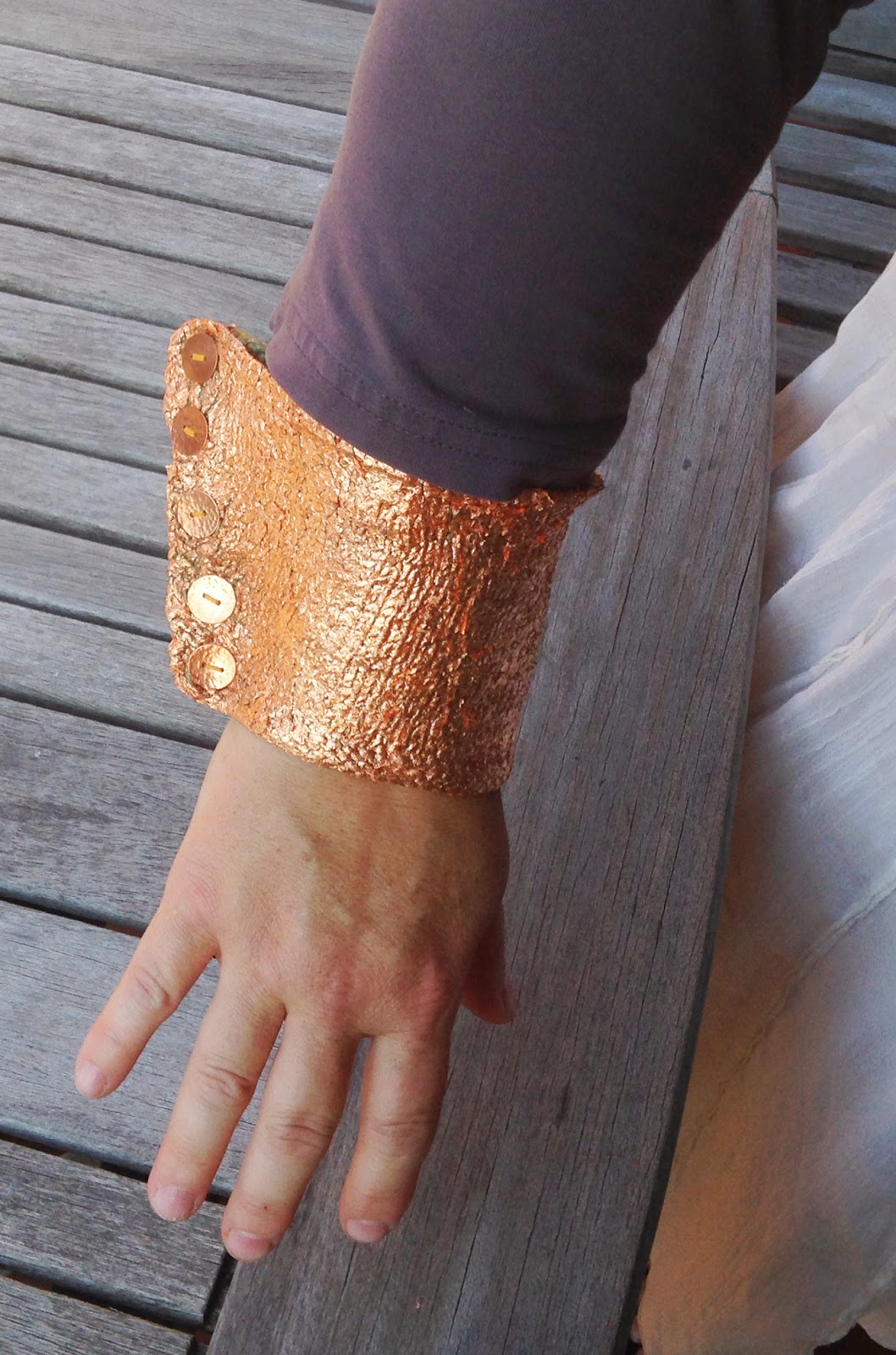 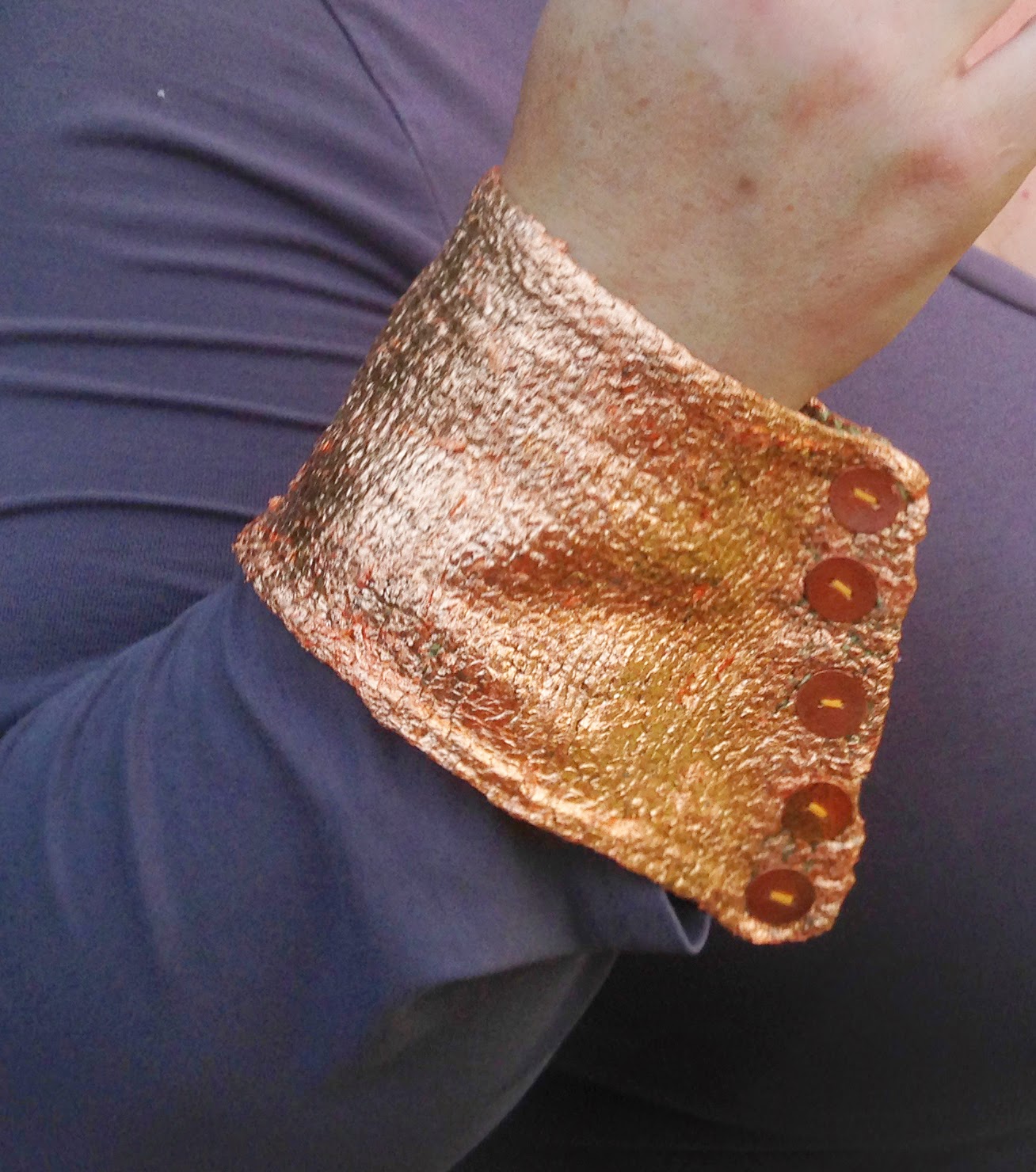 As you can see in the finished photographs, the cuff kind of looks like a superhero accessory. Like I am Wonder Woman or something. I made the pattern free again because I am not 100% sold on the design as being wonderful. Perhaps others can tweak it to see what they come up with.

Coming up very soon, I am bit by the inspiration bug again after working a family day at the Spiral Jetty on Saturday and finding some amazing salt crystals! 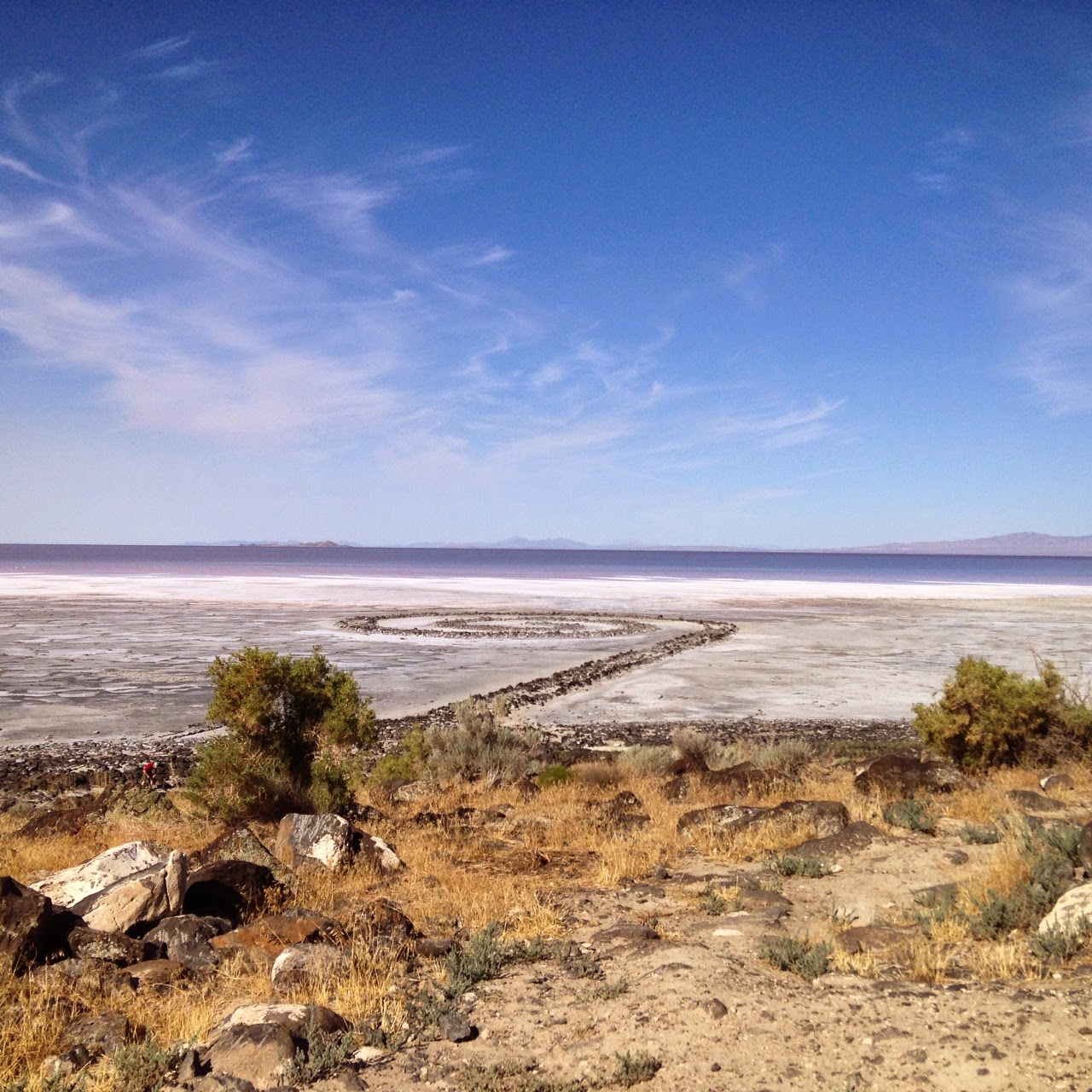 Posted by Virginia Catherall at 11:13 AM No comments: 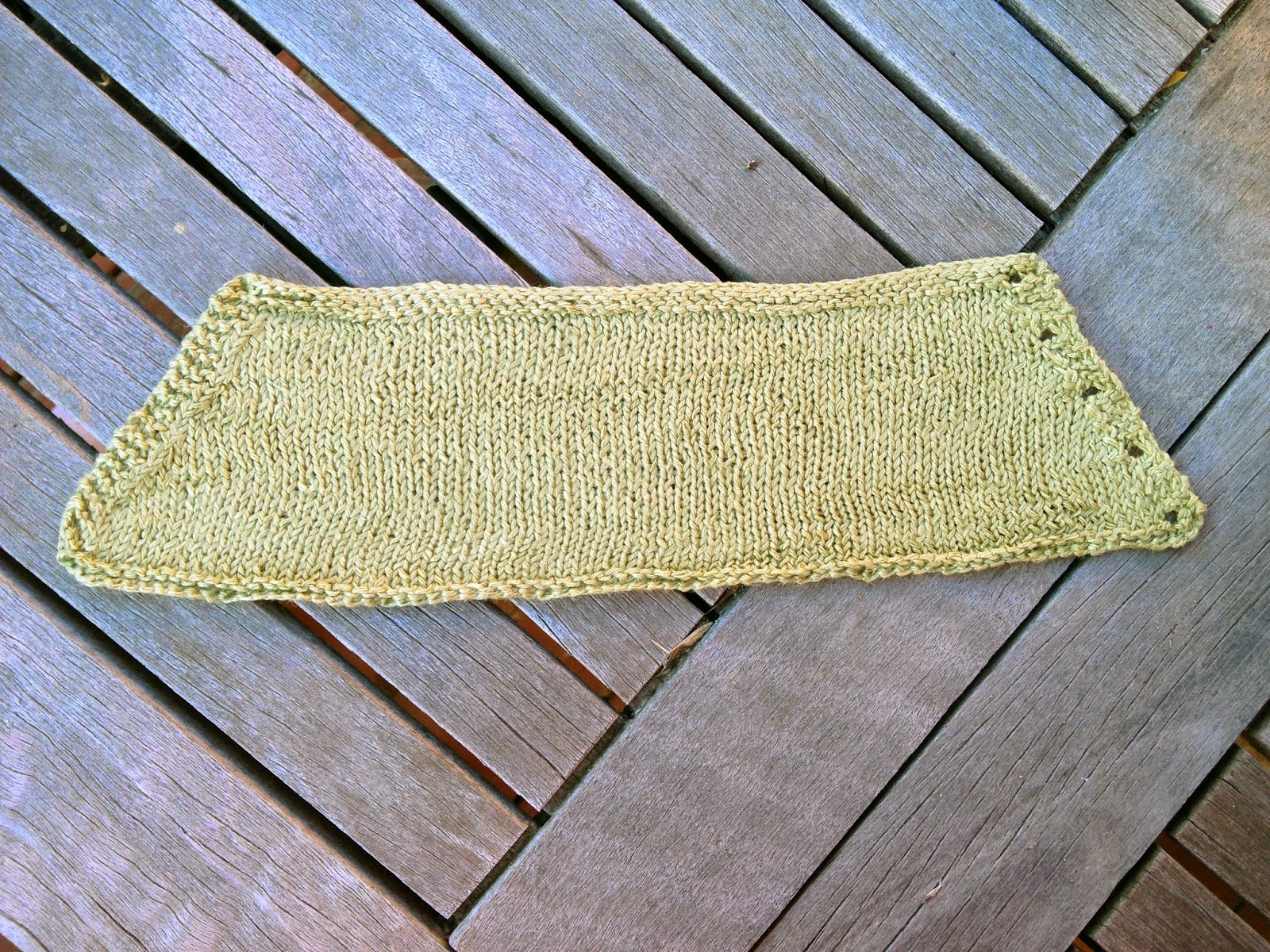 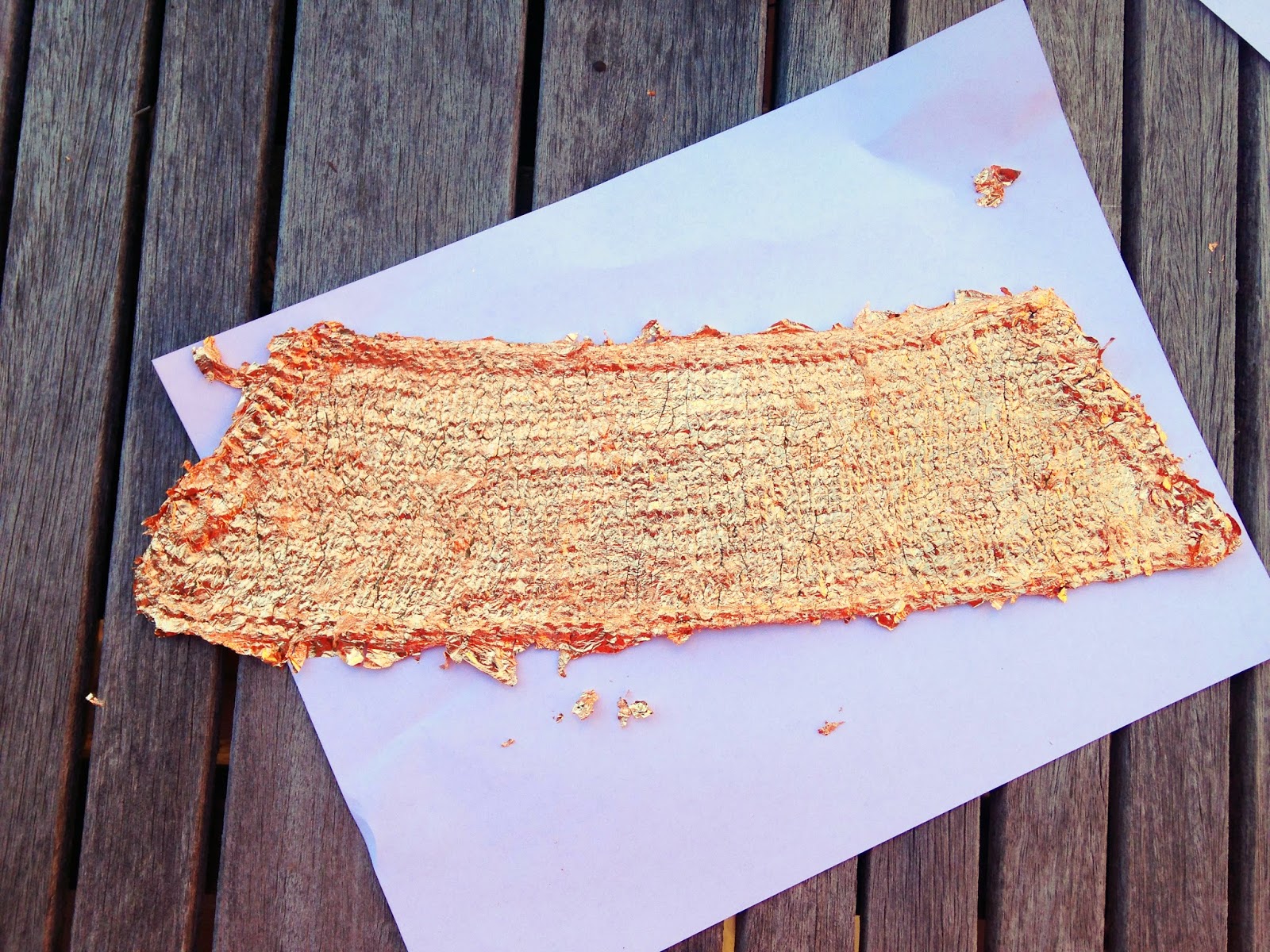 Thank goodness for holiday weekends! I had time to finish the cuff and leaf it. It was a messy job and my backyard picnic table is covered in copper leaf, but I think it will turn out ok. After covering it in the leaf, I let it dry and then rub it all over to take off the loose leaf. You can see in a comparison how the copper oxidizes. The swatch is beginning to turn brown. 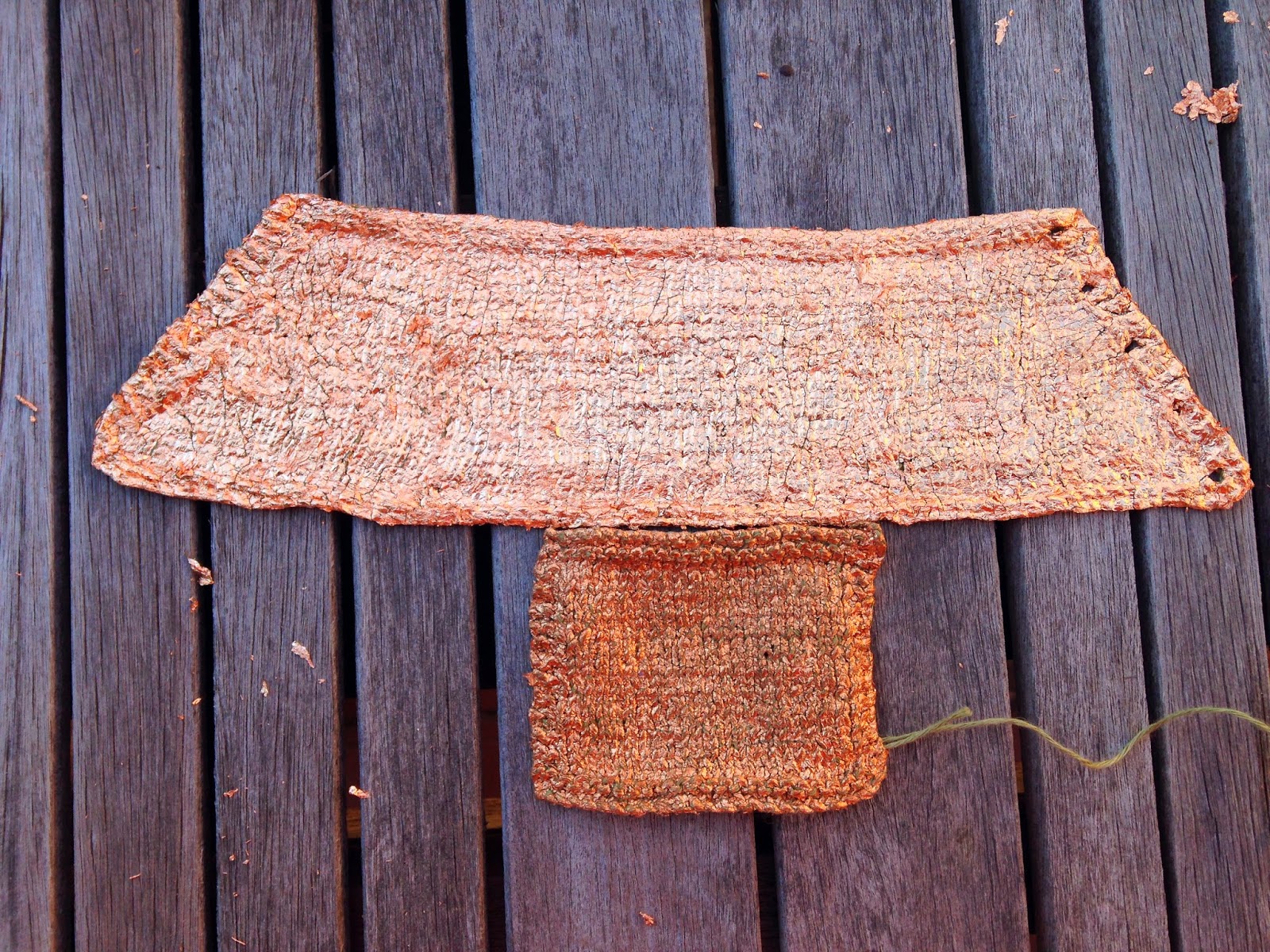 I want to be able to make it reversible so I think I will sew buttons on both sides. Also, that will make it so it can be buttoned like a cuff with cufflinks. It gives the piece a lot of options for fastening. I ordered some copper buttons from Etsy so I am waiting for them to show up before I finish it.

Posted by Virginia Catherall at 9:40 AM No comments:

I have been thinking a lot about what to make with a copper leafed knitted thing. I don’t think it is practical to do anything that will be worn a lot as the leaf does get a cracked and brown patina with age (which I think is beautiful, but probably best left for occasionally wearing). So I am thinking of doing jewelry still but I also want it to be a substantial piece. So I am envisioning a cuff, like the cuff of a men’s shirt but out of copper. 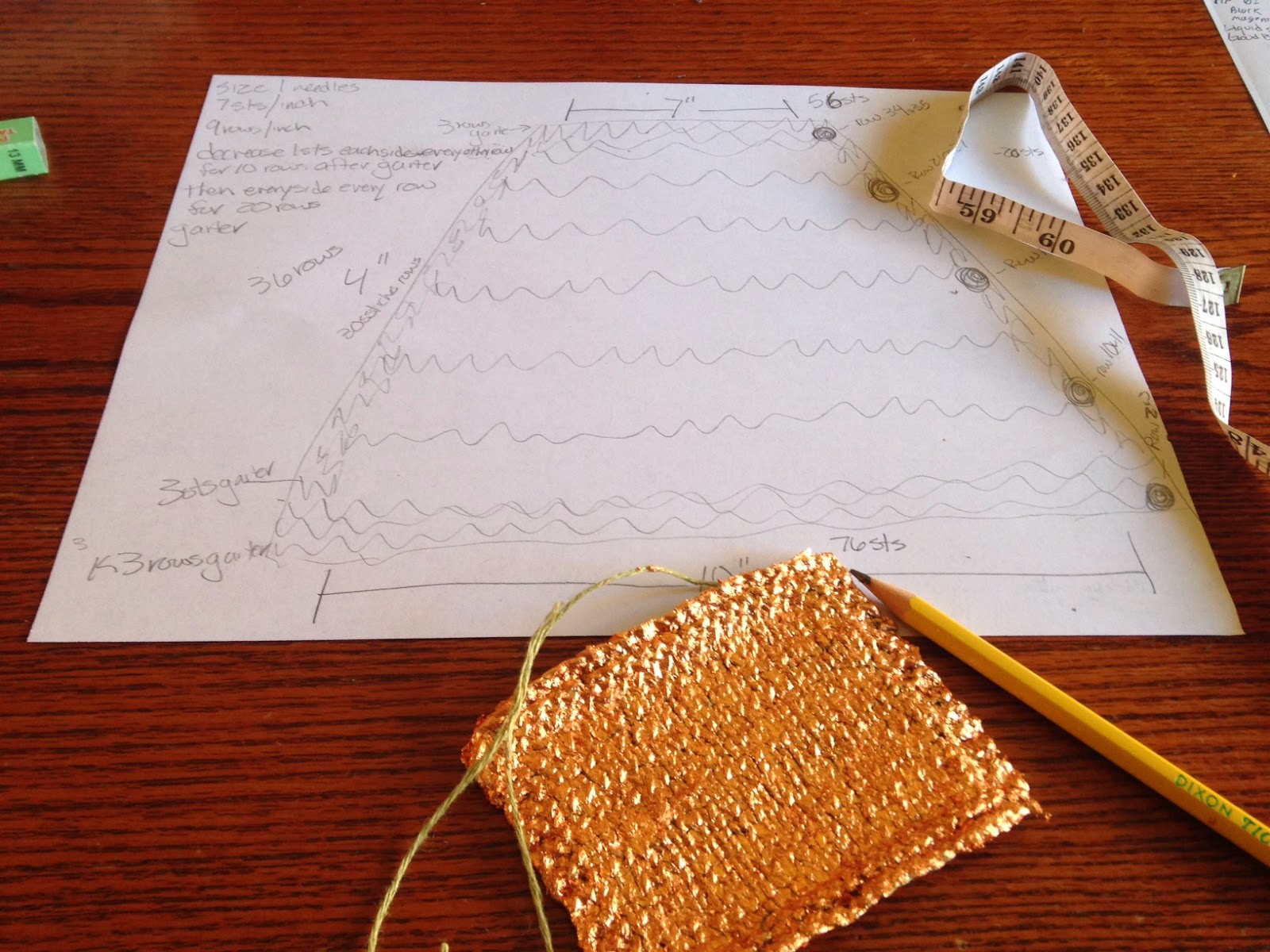 Like this (see above). I made the swatch out of a green hemp and I think I want to keep that yarn. The hemp is substantial enough to take the leafing and glue. It is also a long-wearing fiber which I think will only help this piece. I also like the green I used. It is a verdigris green (basically oxidized copper color). The idea of the green oxidation color peaking through the copper is appealing to me.

Posted by Virginia Catherall at 1:05 PM No comments:

I tried some different glues on swatches and found one that adheres the leaf but still leaves the knitting pliable. 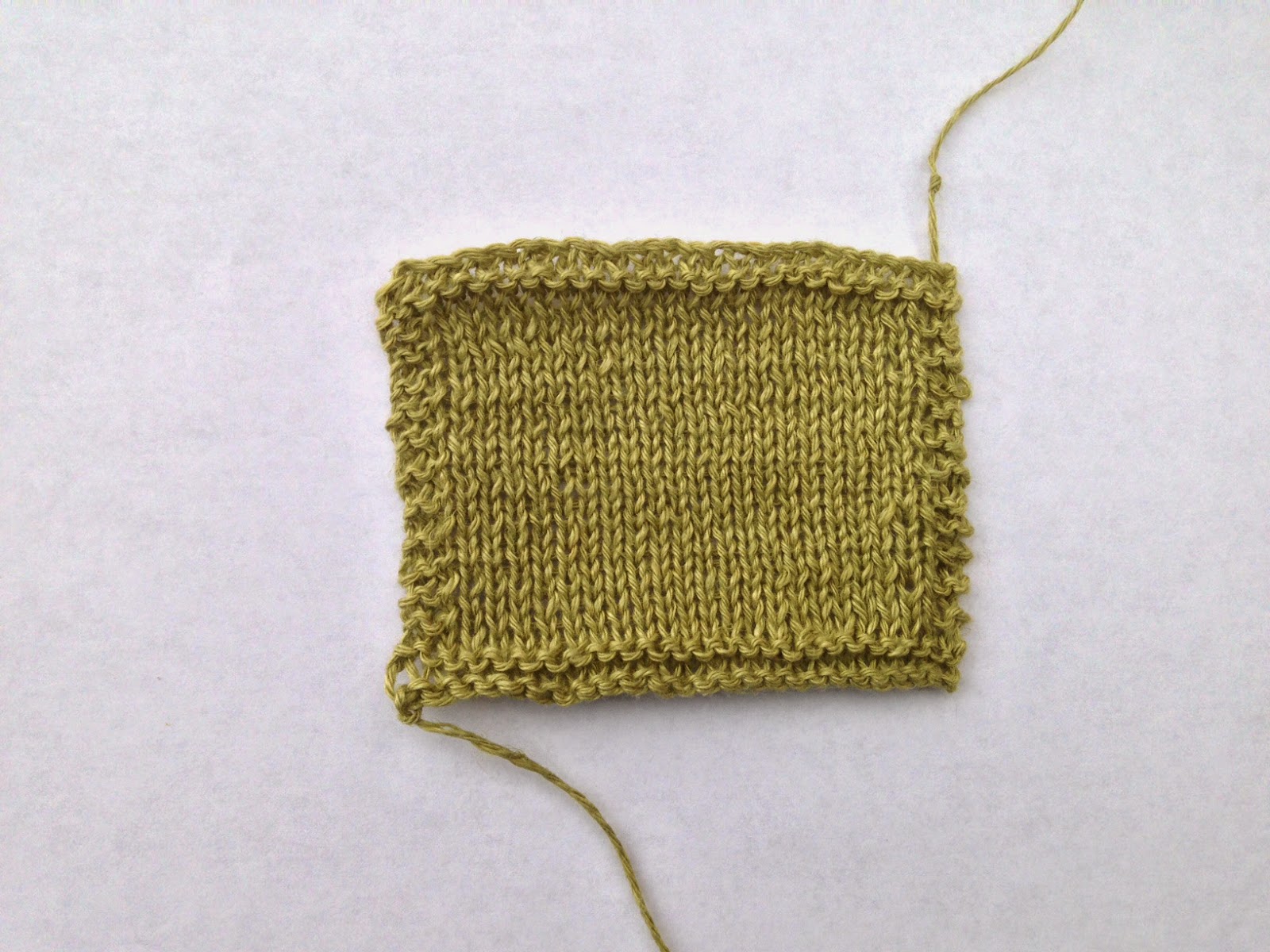 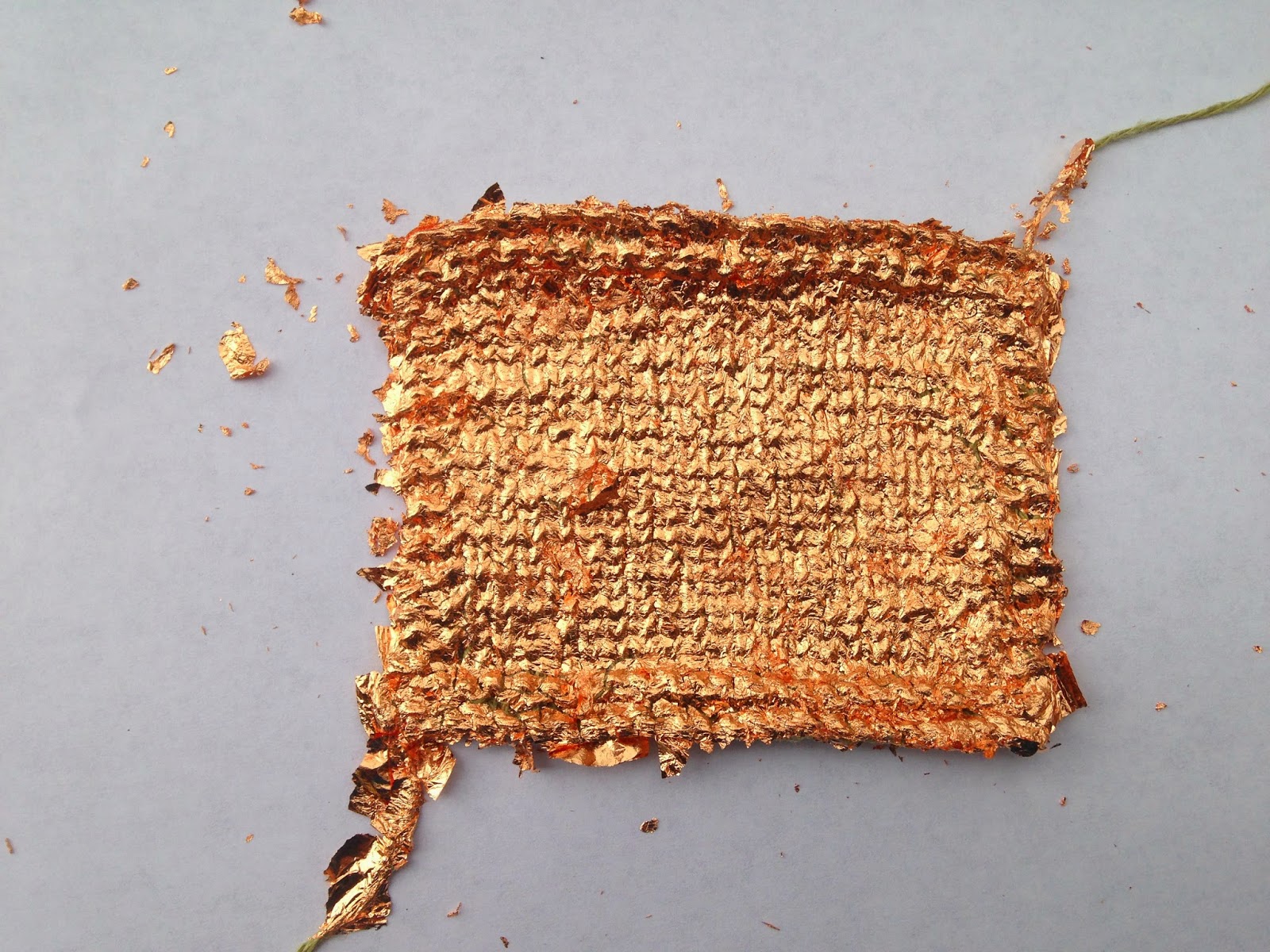 Leafing is a messy business especially on knitting. I am not sure if anyone else but me has ever tried it but I definitely made a mess of my hands. It comes off for the most part, except for my thumb. 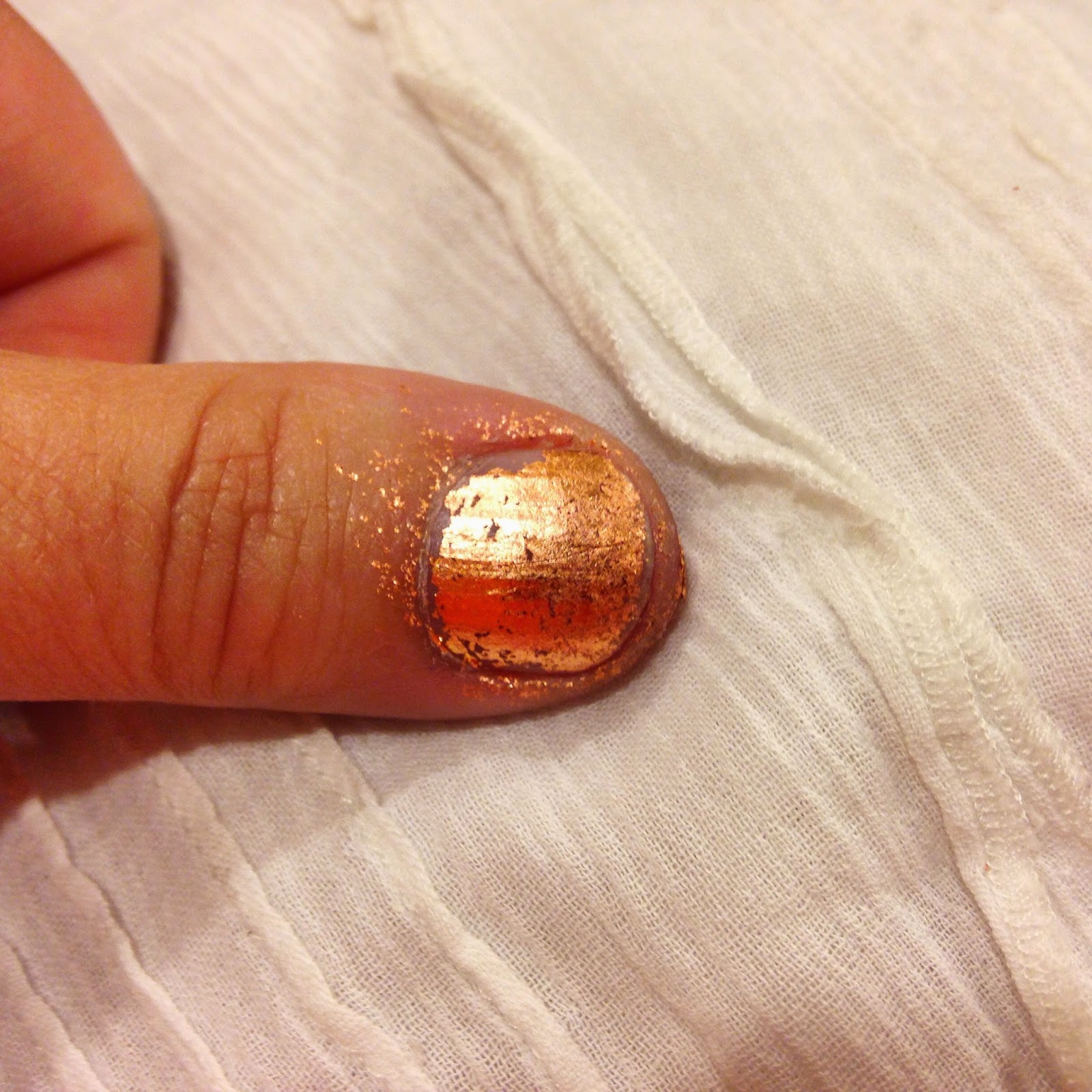 So, I know I want to make something with copper leaf over a bed of knitting. Now what should I make?

Posted by Virginia Catherall at 9:44 AM No comments: 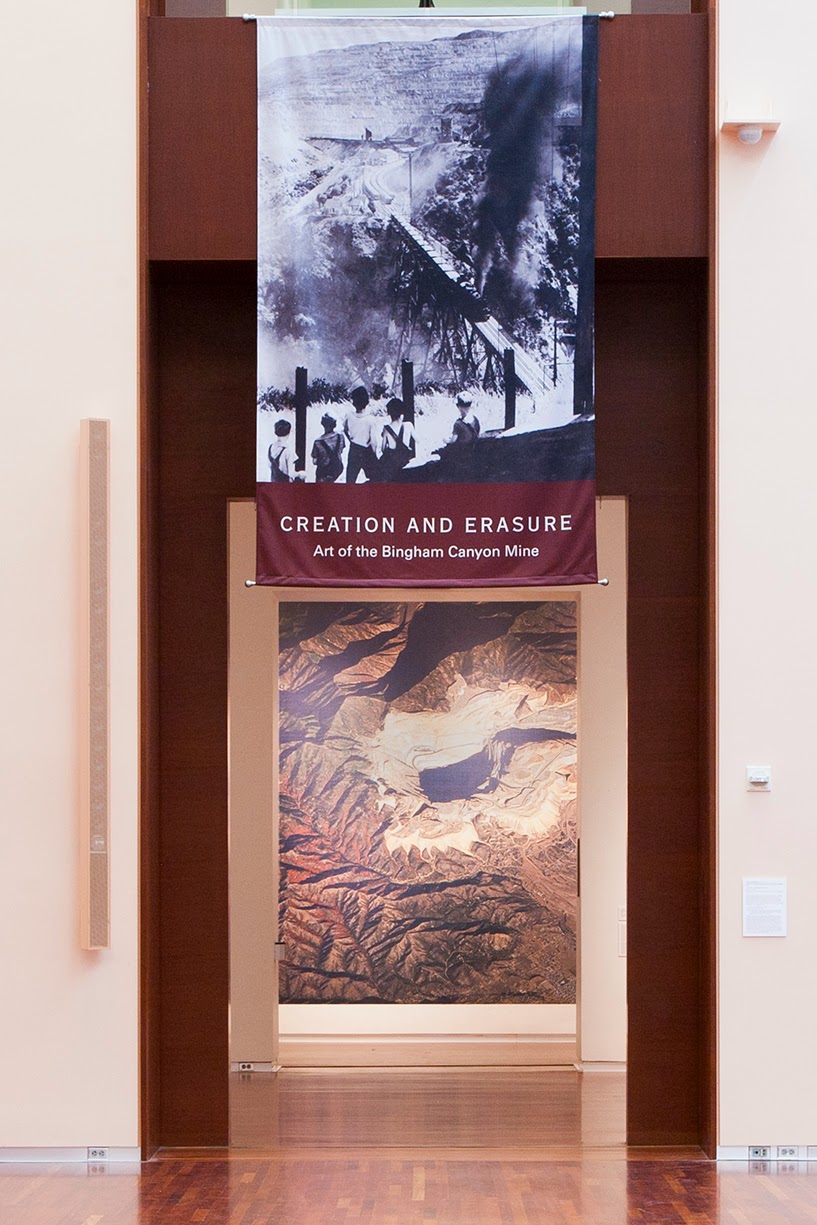 We have a new exhibition at my Museum right now called Creation and Erasure: Art of the Bingham Canyon Mine. I was in charge of the community programming for this exhibition including the interactive space within the exhibit. Which means that I have spent the last six months embroiled in all things copper mine. The exhibition itself is really beautiful. From early documentary photographs to current critical art, the inspiration of this mine for artists (including big-time artists like Ansel Adams and Robert Smithson) is amazing. And I had a lot of fun making the interactives - you can explore the art, history and science of the mine, or even draw your own landscape. 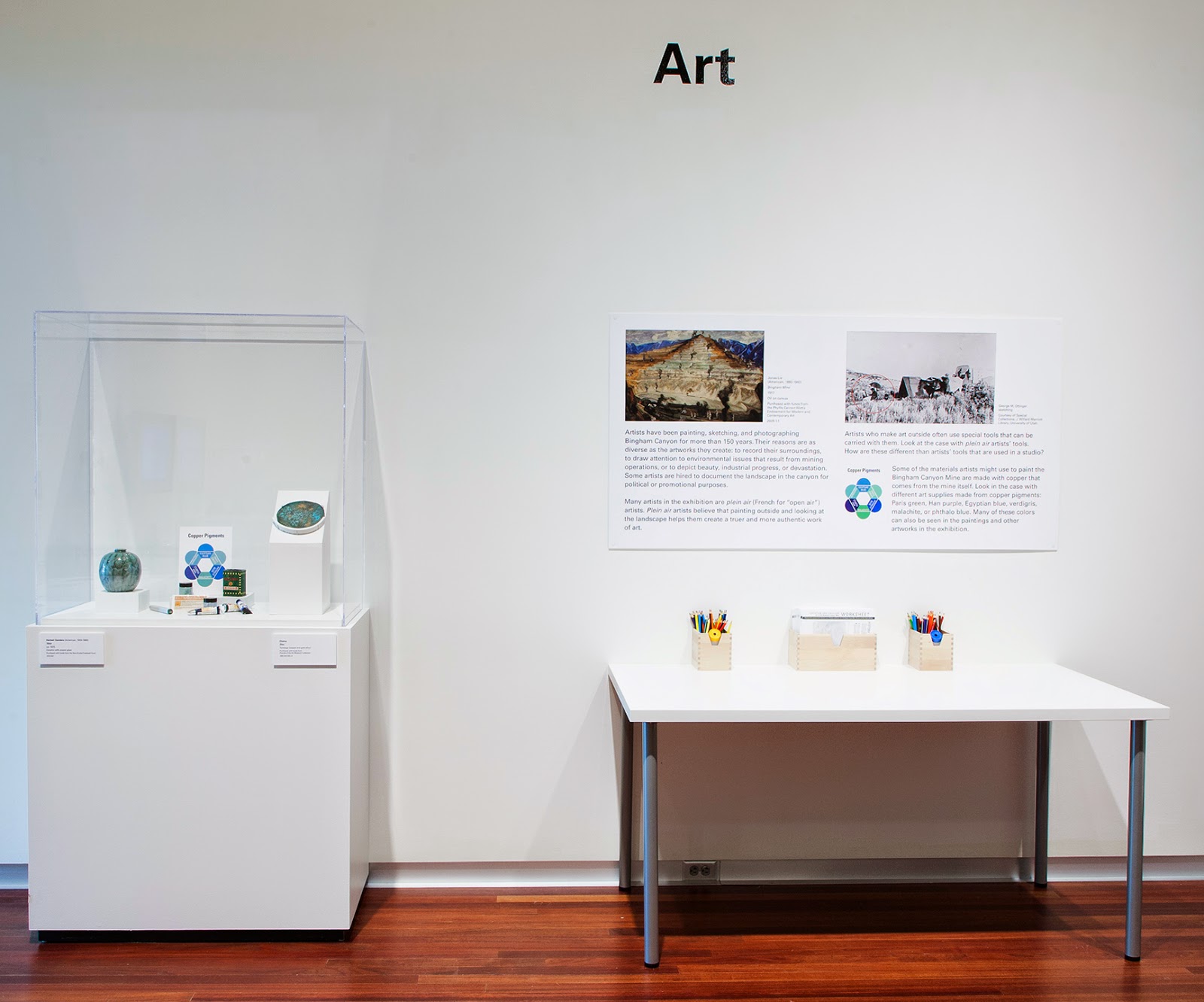 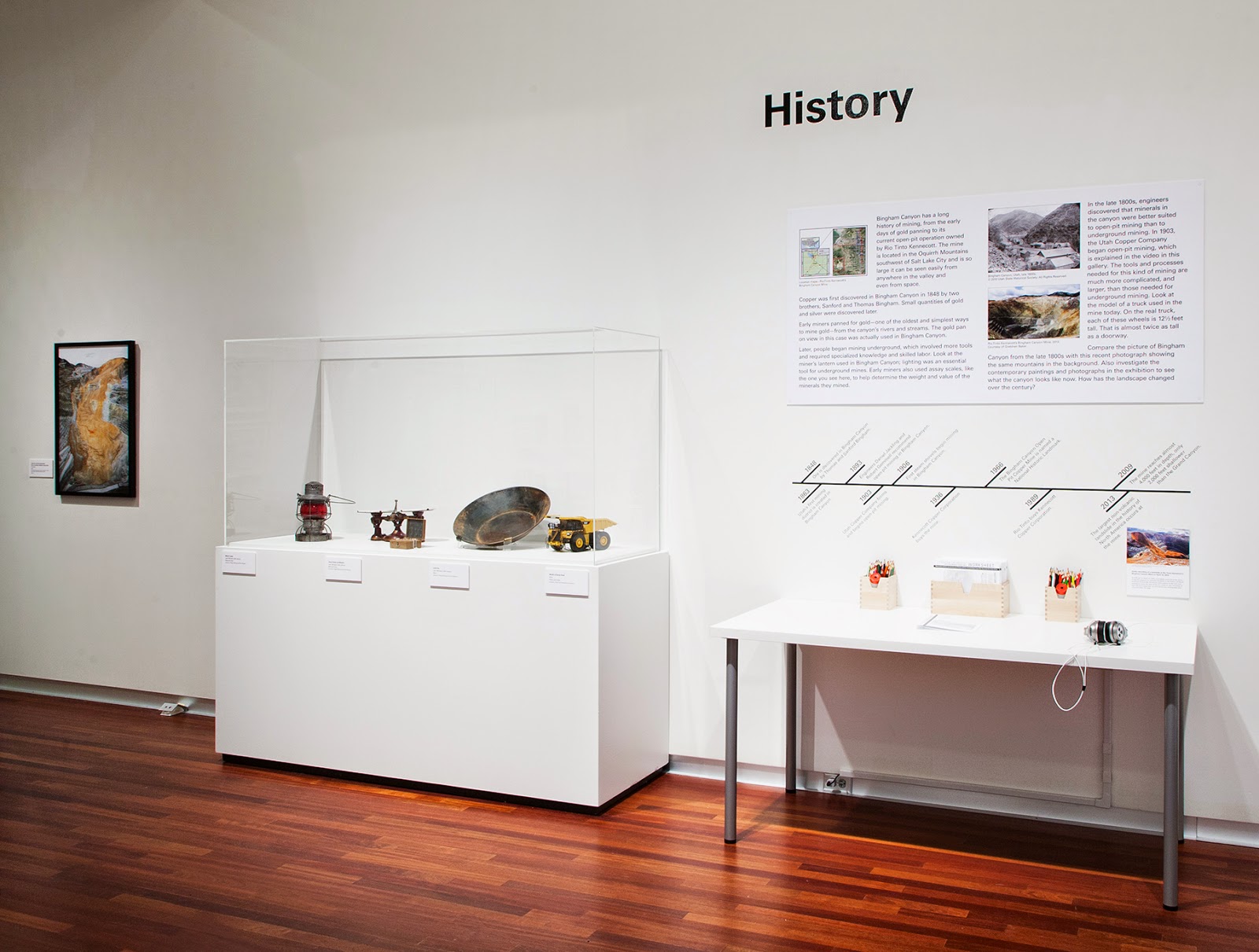 Bingham Canyon Mine is the largest open pit copper mine in the world. It is located in the Oquirrh Mountains by Salt Lake City, Utah and can be seen from anywhere is the valley. And even from space (well everything can be seen from space now) but it is said that if you were to take a trip to Mars, the last man-made thing you would see with your naked eye would be the Bingham Canyon Mine. Now called Kennecott Copper Mine, the mine has been in existence for over 150 years. It produces 300,000 tons of copper per year, providing 13% of the US copper needs and 33% of the valley’s pollution. 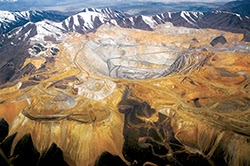 Although it is an eyesore (it basically destroyed a mountain) and it does pollute quite a lot, I am aware that copper is a necessity in today’s world. I wouldn’t be blogging without copper in my computer and cell phone. And I wouldn’t be able to create without it. A year or so ago, I created a cuff knit with copper wire inspired by the town of Lark that was destroyed when the mine became too large. 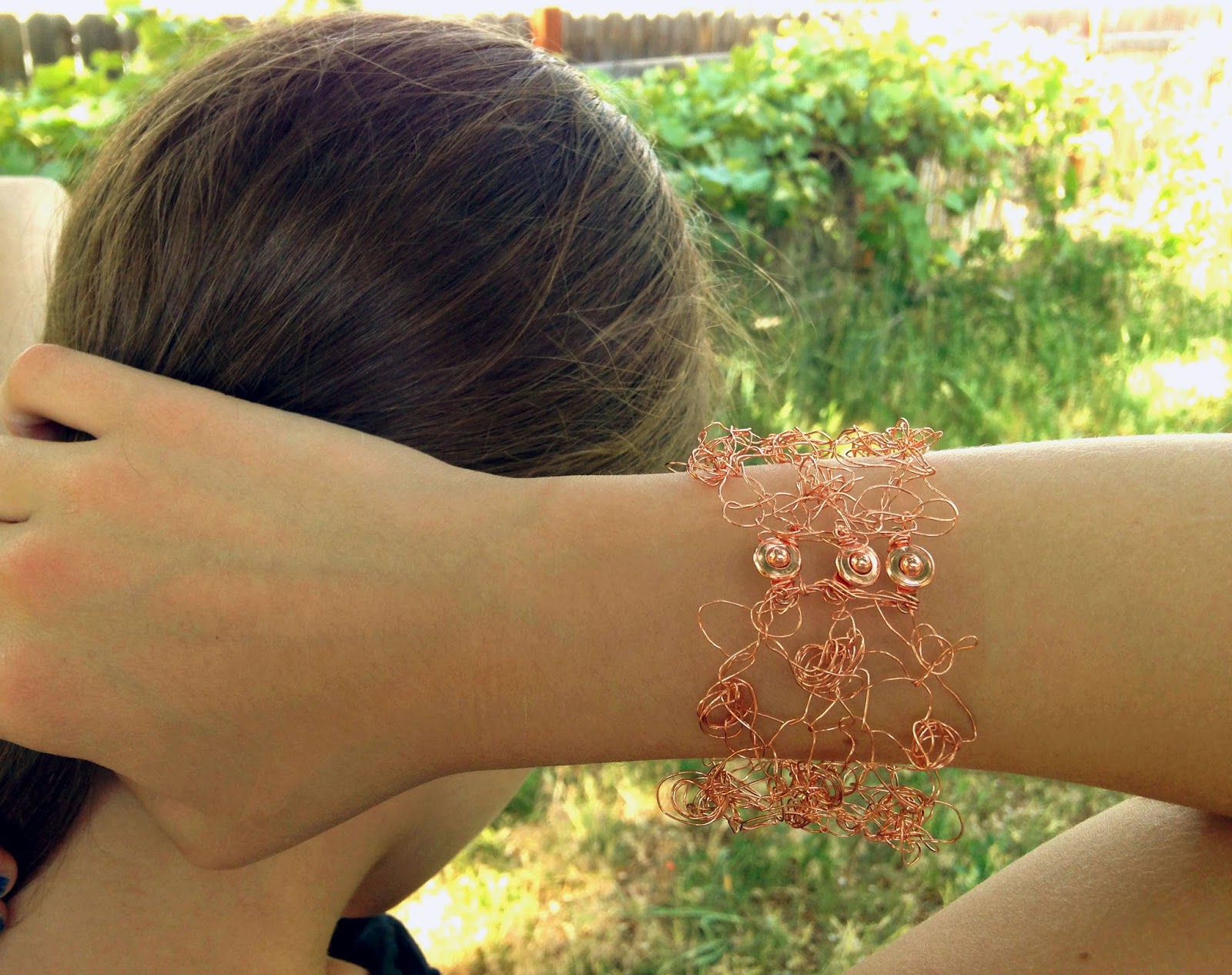 With my mind in all things copper over the last few months, I have been dreaming of making something with copper again. But, I want to experiment more with leafing. If you remember the Silver Queen Handkerchief that I silver leafed and submitted to an exhibition. In that piece I was looking for a very flakey, loose leafing for an effect. But I have been thinking that if I use a different glue, I might be able to get a better leafing that can be worn. 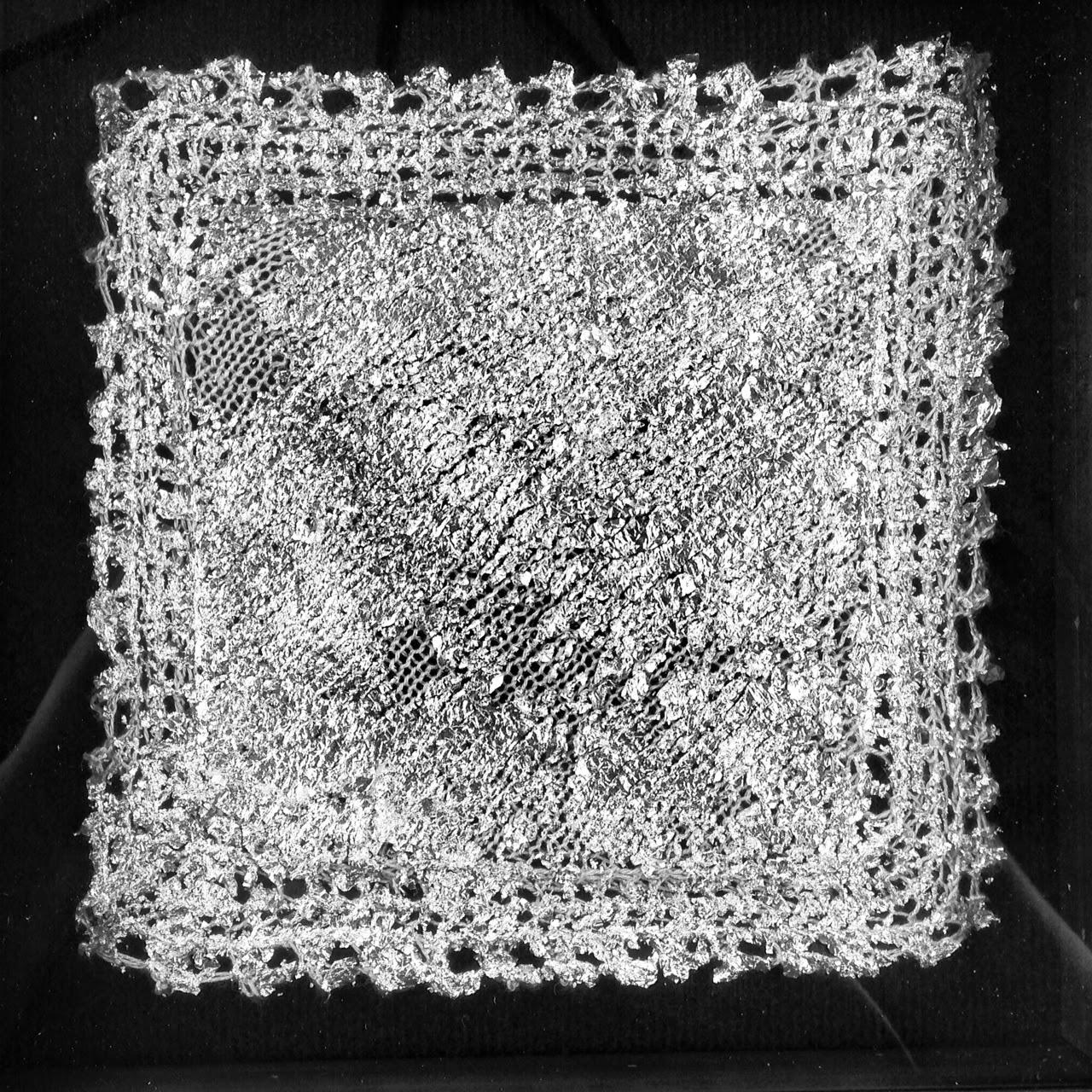 I will begin some experimentation and see what happens. But, if you are in Salt Lake City this summer, it is worth a trip to come see the exhibition.
Posted by Virginia Catherall at 11:27 AM No comments: