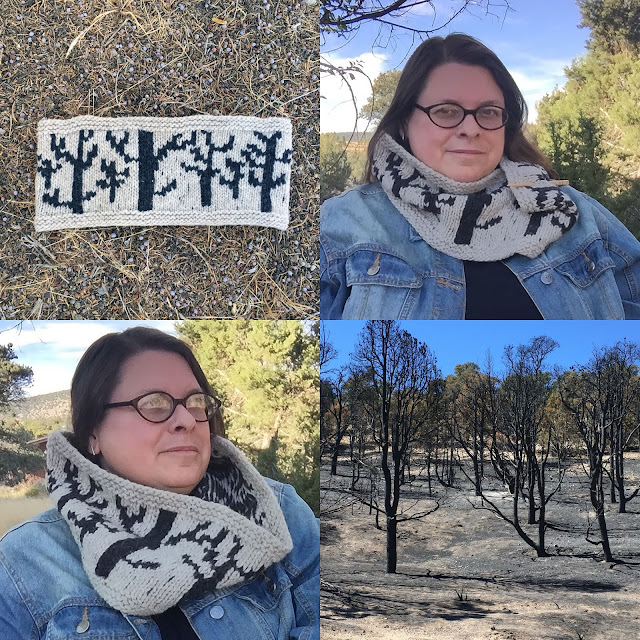 Right before I went to Great Basin National Park, there was a wild fire near the Strawberry Creek area in the northern part of the park. The fire was devastating and one firefighter lost his life. Many of the hikes I was planning on taking were closed because of the damage and the danger that still persisted. When I arrived, I wanted to see the destruction for myself. I was warned that I should stay in the car due to snags, dead hollow trees that have been burned and are in danger of falling.

When I arrived, I was struck by the damage and the bleakness it left. But there is a destructive beauty to the stark black trees against the bare ground. The contrast stuck with me and I formed it into a pattern on a cowl. Plus, I wanted something to keep me warm as the nights were starting to get cold.


On August 8, 2016 a fire was reported in the Strawberry Creek area of Great Basin National Park. Started by lightning, the Strawberry Fire burned more than 4,000 acres before it was contained. The complete devastation of the forest left black trees in stark contrast to their surroundings. Leaving no doubt about nature’s power. This artwork was produced under the Darwin Lambert Artist in Residence Program at Great Basin National Park.
Posted by Virginia Catherall at 7:28 AM