Deconstructing the Miracles of the Gulls

Betty and the Seagulls, 1936 by Minerva Teichert

It has been very interesting looking into more depth of the Miracle of the Gulls story. Although it is such an important story to the LDS church today, some of the journals written during that time in the Salt Lake Valley don’t even mention it. Although some journals do write about the crickets eating crops, they have no mention of seagull. It seems that the seagull phenomenon was not widespread but more localized to a few areas. A letter to Brigham Young in June 1848 does acknowledged the gulls saving crops from infestation: “The sea gulls have come in large flocks from the lake and sweep the crickets as they go; it seems the hand of the Lord is in our favor.” At the time the event was called the “cricket war” but later became “The Miracle of the Gulls” and in 1913 the monument in Salt Lake was built to commemorate it.

Scientists say that gulls regularly devour crickets, grasshoppers and other insects during summer months in the Great Basin (where Salt Lake is located). I have not been able to find any mention of gulls regurgitating food except for when they feed their young. The indigenous gull that is the main character in the story is the California Gull. It has a white body, grey wings and a yellow bill. The Mormon cricket is actually a katydid with very small wings that cannot fly. 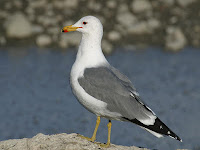 I like the idea of having a motif that is on a baby sweater or cardigan of the cricket and the seagull; like a row around the bottom of the sweater. I made a quick sketch of what I am thinking. 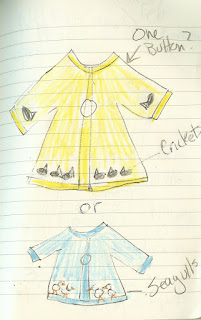 My next step will be to graph out a cricket and /or seagull motif.

Posted by Virginia Catherall at 8:42 AM